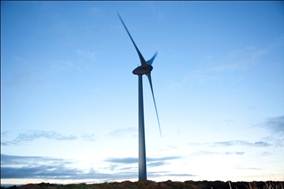 Ed Gill, head of external affairs at 100% renewable electricity supplier Good Energy explains why the UK should do its utmost to capitalise on its natural resources.

The debate over onshore wind has been hitting the headlines in recent weeks, sparked by a cohort of 106 MPs who wrote a letter arguing that the government should be reducing subsidies to wind farms. Prime Minister David Cameron responded with a strong defence of the government’s plans for wind.

Ed Gill, head of external affairs at 100% renewable electricity supplier Good Energy explains why the UK should do its utmost to capitalise on its natural resources.

The debate over onshore wind has been hitting the headlines in recent weeks, sparked by a cohort of 106 MPs who wrote a letter arguing that the government should be reducing subsidies to wind farms. Prime Minister David Cameron responded with a strong defence of the government’s plans for wind.

It’s a hot topic in the media, with the Guardian running a major new series on wind power, Donald Trump vowing to derail Scottish plans for wind farms single-handedly, and the Telegraph reporting on another letter from a group of public figures voicing their support of the 106 MPs.

In any discussion of those views, it is worth considering the wider context of our energy market. The global economy is built on the assumption of fossil fuels being cheap and plentiful, with little regard for their environmental impact. In the UK, for example, our energy market was designed in the early 1990s – at a time when North Sea oil and gas supplies were abundant. That is no longer the case, so we now need to look at other, more sustainable resources. Renewable energy can help solve those issues. Using the resources we have here in the UK means that we can meet our needs in this area in a way that is secure, stable and sustainable, and we have a huge amount of potential in that respect.

We have approximately 40% of Europe’s total wind resources and as an island we are perfectly placed to lead the world in marine generation technology. Solar power has an important role to play and hydro power is already a popular and important energy source, particularly at a community level. All of these and other technologies have an important part to play in weaning our economy off increasingly unstable international fossil fuel supplies.

This presents a huge opportunity for us as a country. The simple fact is that we need to invest more in our energy infrastructure in the UK because we haven’t done for so long. In renewables, we have the chance to ensure that the money we spend on our energy stays here in the UK, rather than disappearing abroad to the world’s oil and gas exporting nations.

Moreover, if we continue with a ‘business as usual’ approach that focuses on non-renewables then we’re also leaving our economy exposed to the rising costs of fossil fuels, whilst contributing to climate change. Today, some 60% of the energy we use is imported. We’re already seeing the impact of this at a macro-economic level – over the autumn, rising energy bills were the single biggest factor in pushing up inflation. The more ‘insulated’ we are from global fuel prices, the more secure and reliable the energy market is as an essential pre-condition for a successful economy.

To deliver that, we need to capitalise on the UK’s wind resources. Because we are a European leader in this respect, our wind farms perform better than their counterparts in Germany and Denmark. Whilst many critics of wind cite its intermittency and cost as a reason not to invest, the reality is that over the years, the energy industry has pioneered onshore wind power as a reliable, efficient and cost-effective energy source.

But there is a need to ensure that investment in wind power is matched with effective engagement with local communities. With the right planning, wind farm developments can benefit the surrounding community. Through projects like our proposed wind farm at Holm and Hollymill near Inverness, for example, Good Energy is ensuring that those living close to our wind farms benefit from the project by planning for a community bond, local electricity tariff and community fund to provide financial support to local projects. At Delabole, our first wind farm in Cornwall, we contribute over £9,000 per year to small-scale projects that benefit locals, with a committee of local representatives deciding how the money is spent.

The UK has been slow to invest in renewables, but the general feeling is that the ball has started rolling. Wind is attracting a lot of attention at the moment, often for the wrong reasons, but with the huge amount of resource we have in the UK, we simply can’t ignore it. In fairness, there is a lot more public support for wind power than is often given credit for. A recent YouGov poll found that the majority of people in the UK want to see more investment in wind farms.

We believe that renewable development projects, combined with smaller scale and home generation, have the potential to help the UK become self-sufficient in its energy needs. It’s about putting power in the hands of people and bringing energy generation into the communities that use it.