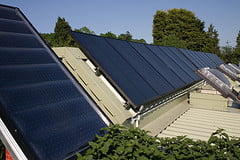 In 2011, investment in the solar sector propelled clean energy to new highs, according to Bloomberg New Energy Finance. Alex Blackburne looks at the figures.

In 2011, investment in the solar sector propelled clean energy to new highs, according to Bloomberg New Energy Finance. Alex Blackburne looks at the figures.

Figures from independent analysers, Bloomberg New Energy Finance (BNEF) show that the main driver behind the increase is the solar industry.

Investment in the sector rose to $136.6 billion – contributing over half of the overall figure.

Michael Liebreich, chief executive of BNEF, reflected on a good 12 months for the renewables industry.

“Overall, 2011 was a far better year for the clean energy industry than the press coverage would lead one to believe”, he said.

The global clean energy economy achieved the record figures despite the significant turbulence that has engulfed the world market.

Liebreich added, “2012 looks like being another challenging year, with the European financial crisis continuing to fester, and the supply chain working its way out of some fearsome over-capacity”.

He went on to quash any rumours of a clean energy demise, stating that reports claiming this, had been “greatly exaggerated”.

“We will be seeing a new generation of technology starting to hit the market [in 2012], and we are expecting important announcements by some of the biggest energy and engineering companies in the world as they take advantage of current market conditions to establish themselves in the sector”.

US investment overtook that of China for the first time since 2008, with the Americans investing $56 billion to the Chinese’s $47.4 billion.

Last month, BNEF announced that by their records, the trillionth dollar had been invested in clean energy since 2004.

The organisation had previously predicted that over $400 billion worth of renewable investments would occur by 2020.

Amongst the encouraging figures lies a message. Continued investment in clean technology is imperative if we are to achieve a sustainable future.

You can invest this way by getting in touch with your financial adviser. If you don’t have one, fill in our online form and we’ll put you in touch with an ethical one.