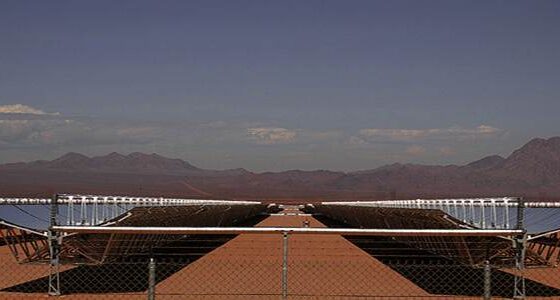 Alex Blackburne explores the increasingly deliberated idea of widespread solar power generation in deserts, and how it can provide generational opportunities to millions.

One of the biggest hindrances for renewable energy – particularly solar – is its ability to produce power consistently.

Alex Blackburne explores the increasingly deliberated idea of widespread solar power generation in deserts, and how it can provide generational opportunities to millions.

One of the biggest hindrances for renewable energy – particularly solar – is its ability to produce power consistently.

Whilst we can guarantee there will always be sunlight in the world somewhere, many locations for this type of renewable energy are flawed, insofar that nature is sometimes selfishly unpredictable, and the sun simply doesn’t shine enough for the projects to be wholly sustainable.

Hereby arrives an opportunity – one that is so vast, it has the potential, if managed correctly, to power the whole world.

With around one third of the Earth’s land surface covered by desert – a lot of which is unused, untouched and uninhabited – installing massive solar farms to generate energy for whole continents is an entirely realistic prospect.

The role of pioneers of such a scheme falls to Desertec, a $400 billion, largely German-led project, which plans to install a huge network of solar farms across Middle Eastern and North African deserts, with the ultimate aim being a 15% energy contribution to Europe.

The scheme makes sense too, with the largest desert in the world, the Sahara, covering 9m square kilometres across 12 countries, making it the perfect base for a solar power revolution.

After being announced in 2009, the ambitious initiative was initially met with scepticism by many in the solar power sector, with one article in The Economist labelling it “audacious if fanciful” in 2010.

But two years of continued industry backing has promoted the Desertec scheme from pipedream to reality, and in November, it announced plans to build its first solar farm – a 12 square kilometre project in the Moroccan desert.

Daniel Ayuk Mbi Egbe of the African Network for Solar Energy was quoted in The Guardian to have claimed that historical trends had meant that not everyone in the continent was behind the project.

“Many Africans are sceptical [about Desertec]”, he said.

“It’s a new form of resource exploitation, just like in the past.”

In the same Guardian article, Paul Van Son, CEO at Desertec, acknowledged that there had been early doubters, but said that they were now on the same wavelength.

“When the idea for Desertec was first announced there was anger and irritation from the Arab League“, he said, “They didn’t understand it at first, but we explained that it would benefit their members, too.

“We explained it would be a cooperative process and they became more relaxed. It’s a win-win for all, we stressed. The relationship is all positive now.”

The above image shows the potential enormity of the Desertec network, which is planned to encapsulate and harness all forms of alternative energy across Europe, North Africa and the Middle East, and not just solar power.

The image puts the network into a visual perspective, and reveals the vastness of the North African deserts, which are just waiting to become home to large-scale solar projects, and ultimately provide power to millions of people.

One question to arise following the increased prominence of the plans is, “Why hasn’t this been done sooner?”

Even though such innovative and world-changing plans might, in theory, sound simple enough – it’s easy to erect thousands of solar panels in the middle of a desert, and just sit back and watch the electricity metre rise, right?

Although the idea for solar generation in deserts is certainly not a new idea, it’s taken until the 21st century to invent and accumulate the necessary technology to undertake such an ambitious project.
Now it’s here, and we’ve finally realised it’s completely achievable, we can start planning for our future, safe in the knowledge that it’s going to be a heck of a lot more sustainable.

For democracies emerging after the Arab Spring, which have plentiful deserts within their borders, solar energy could make them the world’s exporters of clean energy in a post-oil world.

The Desertec project is just a speck in our hopes for creating a blue and green tomorrow. The rest is down to you, and where your money is invested. To find out more about how to make your money make a difference, ask your financial adviser, if you have one, or fill in our online form, and we’ll connect you to a specialist ethical adviser.