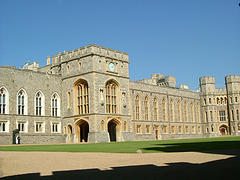 The Queen will now be more environmentally friendly as the final 40 tonne screw for a scheme that will power Windsor Castle was lowered. So will we follow our green monarchs? Charlotte Reid finds out.

Starting in the New Year, a hydroelectric scheme – which cost £1.7 million – will start to generate power for Windsor Castle and 300 homes.

The Queen will now be more environmentally friendly as the final 40 tonne screw for a scheme that will power Windsor Castle was lowered. So will we follow our green monarchs? Charlotte Reid finds out.

Starting in the New Year, a hydroelectric scheme – which cost £1.7 million – will start to generate power for Windsor Castle and 300 homes.

A second Archimedes’ screw was lowered into the River Thames on Tuesday December 20th, bringing the building of the project to a close.

The Queen has struck a deal with a power company to buy the electricity created from the turbines to heat and light her home. She is expected to make a huge saving on her electricity bills, which will be going towards other cost cutting measures she has made to make the monarchy better value for money.

This is just the latest environmental plan undertaken by the Royals – the Queen has another hydroelectric plant at her Scottish residence Balmoral.

Prince Charles is a well-known environmentalist. He is passionate about campaigning for the survival of the rainforest and organic farming, which led to him setting up his own organic brand Duchy Originals.

In 2009 he spoke to the delegates at the climate change talks in Copenhagen that “our planet has reached a point of crisis”, encouraging them to take the talks seriously.

But it’s not all good news, as Prince Philip, the Duke of Edinburgh, labelled wind turbines as “useless” and a “disgrace”. When the benefits of wind turbines were explained to him, he replied with, “You don’t believe in fairy tales do you?”

Although the Duke of Edinburgh is usually mocked for his outbursts, it seems the British public agree with him. A recent report into British attitudes found that 37% of people think that environmental threats are exaggerated and only 43% think climate change is dangerous for the environment.

But people tire of the fight against climate change, which increasingly is an issue that needs to be tackled.  It is a chance to become involved in interesting technologies that even have the royal stamp of approval.

If you want to follow in the footsteps of others and make a difference then think about getting energy from a renewable source. We recommend Good Energy.