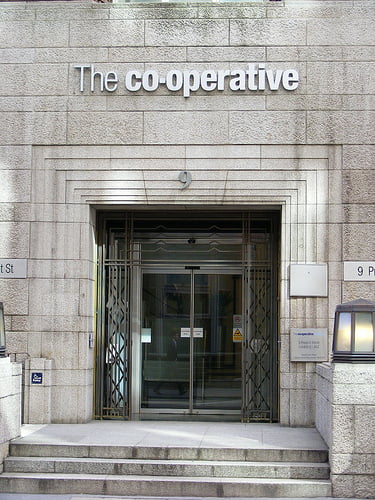 It was lauded as “the biggest shake-up in high street banking in a generation”, but today the Co-operative Bank has revealed that it is pulling out of a deal to buy 632 branches owned by Lloyds Banking Group.

The Co-op had initially revealed its intentions to take on the extra 4.8 million customers in July last year. It would do so by purchasing Verde – the working name for a new bank that Lloyds had planned to launch later this year.

But it has been announced this morning that the £350m deal – which would have increased the Co-op’s market share from 1% to 7% – had fallen through.

The BBC’s business editor Robert Peston claims the events could signal an end to the Co-op Group’s 141-year foray into banking. Incoming chief executive Euan Sutherland, who replaces current incumbent Peter Marks on May 1, will review the group’s structure upon his arrival, and Peston says there is a “possibility it will get out of the [banking] business in an orderly way”.

The decision to scrap the transaction comes a month after the publication of the Co-op Group’s annual report, in which it revealed it had made losses after what it described as a “challenging” 2012.

Meanwhile, the Co-op Bank – a mutually-owned bank that is often regarded as the alternative sector’s highest-profile player, and featured in Blue & Green Tomorrow’s Guide to Sustainable Banking 2012 – was fined £113,300 in January for delaying payment protection insurance (PPI) complaints.

Speaking about the decision to abandon plans to take on the Verde stream of Lloyds branches, Marks said, “Against the backdrop of the current economic environment, the worsened outlook for economic growth and the increasing regulatory requirements on the financial services sector in general, the Verde transaction would not currently deliver a suitable return for our members within a reasonable timeframe and with an acceptable level of risk.”

António Horta-Osório, chief executive of Lloyds Banking Group, said he was “disappointed” that a deal could not be reached.

The 632 branches, made up of Lloyds TSB and Cheltenham & Gloucester offices, will instead be floated separately on the stock market as TSB Bank, which Lloyds is now planning on launching as a subsidiary in the summer.

The Verde deal would have helped the Co-op bring ethical banking to the mainstream, while also providing greater competition on the high street. Its collapse has therefore disappointed campaigners.

“It’s a really bad day when the only banks that can thrive in our economy are those that have broken the laws and deceived their customers”, said Laura Willoughby, chief executive of Move Your Money.

“The Co-op is loved by its customers and evidence shows that more and more people are switching to it and other ethical banks. It would be foolish to slam the door in its own face just when things are getting interesting.”

She added, “The government should be supporting the challenger banks like the Co-op to compete with the big 5. Meanwhile its the taxpayer that foots the bill as this drawn out bidding tender has hit the rocks.”

Lloyds revealed in March that it had made a £570m loss in 2012 – primarily because of the £3.6 billion it was forced to set aside for PPI mis-selling. Nonetheless, it still paid Horta-Osório a bonus of over £1.4m.