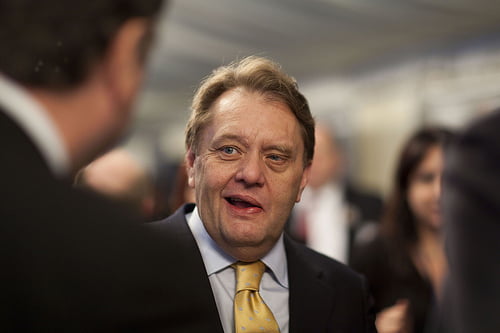 Hayes told The Telegraph and The Daily Mail that onshore wind turbines “peppered” the countryside and that “enough is enough”.

“I can’t single-handedly build a new Jerusalem, but I can protect our green and pleasant land”, he added.

“We will form our policy in the future on the basis of that, not on a bourgeois Left article of faith based on some academic perspective.”

But Hayes – an outspoken wind critic who replaced Charles Hendry as energy minister in September – has been chastised by Ed Davey. A source close to the Lib Dem energy secretary told The Guardian that Hayes was “not in charge of renewable policies on his own” and therefore “has to follow the coalition agreement which is in favour of renewable energy, and meeting our legal EU targets for 2020”.

The source added that the minister was planning to make his comments in a speech yesterday, before being told to remove them by Davey, who this morning issued a statement with regards to the disagreement.

“There has been no change to government policy on renewable energy, as collectively agreed by the coalition cabinet”, he said.

“We’ve put in place support to bring on growth in new industries to deploy the technologies needed to diversify our energy mix in the most cost-effective way.

In his attack of the technology, Hayes added that the UK “can no longer have wind turbines imposed on communities”, saying that existing and planned wind farms would be sufficient to meet the UK’s renewables targets.

This comes after a high-profile alliance of charities, co-operatives and organisations, led by The Co-operative and Forum for the Future, published a manifesto last week to help advance community-owned renewable energy in the UK.

The document includes a poll conducted by ICM on behalf of the Co-operative, which revealed that the majority of people – 68% – would support community-based clean energy projects, compared to just 7% who said they wouldn’t.

Bruce Davis, co-founder and managing director of Abundance Generation, an investment platform that allows potential investors to pledge as little as £5 towards projects, took exception to the Hayes’ comments.

“John Hayes has allowed personal politics to prejudice policy, on the one subject – energy – where evidence and common sense must be the watchwords”, Davis said.

“His words raise serious questions about his ability to be involved in any sort of inquiry into what is the most scrutinised and debated energy technology in the UK – onshore wind.”

He also suggested the creation of an energy policy committee, in order to “treat energy the way we treat money and interest rates and hand over decision making to an independent body of experts who are accountable to parliament for their targets, transparent in the minutes of their discussions and managed for the long term health of the economy – and not allow short term backbench politics to undermine and even prejudice considered ministerial policy development.  The stakes are just too high.”

Figures released by trade association RenewableUK yesterday show that wind power is on track to generate enough energy to power one in 10 homes by 2015 – encouraging statistics that came just days after the Department of Energy and Climate Change (DECC) had announced a so-called “licensing round bonanza” for the oil and gas industry.

“Onshore wind is the most developed and cheapest source of clean energy”, she added.

“If the government tries robbing Peter to pay Paul and cuts support for wind power, it could leave the public with even higher bills.

“Hard-pressed families should not be left to foot the bill if the energy minister wants to play politics with good-paying clean energy jobs and Britain’s energy security.”