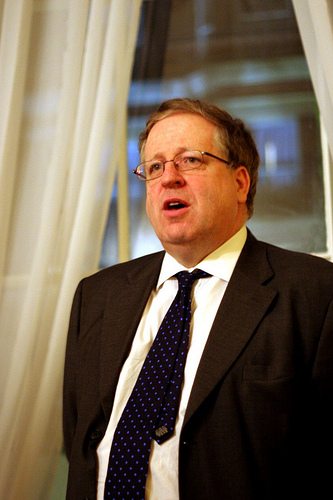 Scrapping plans to build the controversial HS2 rail link would be “a disaster”, the transport secretary has warned, as David Cameron admitted there is a limit to the amount of money he will spend on the project.

Speaking ahead of the Conservative party conference, which opened on Sunday in Manchester, Patrick McLoughlin told the Observer, “I believe [scrapping HS2] would be a disaster.

“I believe it would be a particular disaster for the cities of England and Scotland as well, not to go ahead with high-speed rail.”

He also said that a renewed commitment to the project will be included in the party’s manifesto for the 2015 general election.

Campaigners and MPs have expressed many concerns over HS2, not least because the cost of the controversial development has been repeatedly revised. Government projections currently say that it will cost around £50 billion, although in August the Institute of Economic Affairs estimated that the cost could rise to as much as £80 billion.

However, speaking on the BBC’s Andrew Marr Show, Cameron insisted that the project would be built within the government’s £42.6 billion budget.

The government claims that HS2 will generate around £49 billion in user benefits to business when completed, while a report by accountants KPMG claims that it could boost the UK economy by £15 billion per year by 2037.

However, the Institute of Directors has called HS2 “a grand folly”, while a committee of MPs concluded that the Department of Transport is “yet to present a convincing strategic case” for the project.

Shadow chancellor Ed Balls has said that HS2 had been “mismanaged” and said that it would receive “no blank cheque” from a Labour government.

He added, “the question is not just whether a new high speed line is a good idea or a bad idea, but whether it is the best way to spend £50 billion for the future of our country.”

McLoughlin said that he would want to press on with HS2 even if Labour withdrew all backing for the project, but admitted it would be difficult to complete without cross-party support.

“I’m not going to start guessing what I might do in the future if the facts change. I am not going to prejudge where I would go if the Labour party do something. At the moment we have cross-party support.”