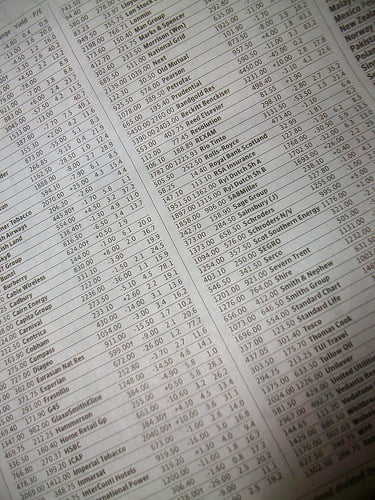 Two of the world’s most prominent share indices – the Dow Jones and FTSE 100 – climbed to highs unseen for a number of years on Tuesday. But there is concern within the financial services industry that investor confidence could be misplaced.

The New York-based Dow Jones Industrial Average, reached an all-time high, while the UK’s equivalent index, the FTSE 100, shot up to its highest level since the financial crisis in January 2008.

Lee Smythe, financial adviser at Smythe & Walter Chartered Financial Planners, said the news had “no doubt been good for investors”. He added that the recent rally – which is likely to improve people’s view of the global economy – could prompt a large shift back towards equity investments and away from bonds.

However, Smythe added, “[There is] the feeling that the recent market strength has been based largely on sentiment rather than substance and there are still potentially damaging events, both at the high level, such as problems in the eurozone and problems with the US debt ceiling for example, as well as at the more direct level, such as businesses and households which are remaining above water due to the continuing low interest rates.

“If we start to see these creep up then we could see a spate of corporate failure and struggling households, which would have significant negative impact on the economy and of course the all-important sentiment.”

Julian Parrott, partner at Edinburgh-based financial advisers Ethical Futures, echoed Smythe’s worries about just how encouraging the news was: “I’m inclined to think that it’s false optimism stoked by a great shed load of cash which is facing near-zero return on deposit and is tempted to take risk to improve return.

“[There is] more cash available, [and] real economy investing is not really racing away so assets prices are rising on false optimism.”

He added, “I’m pleased to see markets rise but bracing myself for a correction.”

The Telegraph’s economics editor Philip Aldrick wrote on Monday how the surge had begun in China, “where outgoing prime minister Wen Jiabao told the Communist Party’s annual congress that his successors would do what it takes to meet the government’s 7.5% annual growth target for the next five years.”

Meanwhile, John Authers of the Financial Times said the Dow Jones was “not broadly diversified and is not representative of the US stock market as a whole” – given it’s only made up of 30 stocks. He added that the performance of the S&P 500 would perhaps better reflect the state of the global economy.

The premise of measuring investor confidence by indices made up largely of unsustainable stocks is seen by some as contradictory to long-term economic recovery. While investors may well be buoyed by the performance of both the Dow Jones and FTSE 100, this should not lead to misplaced confidence in stocks that challenge future prosperity.