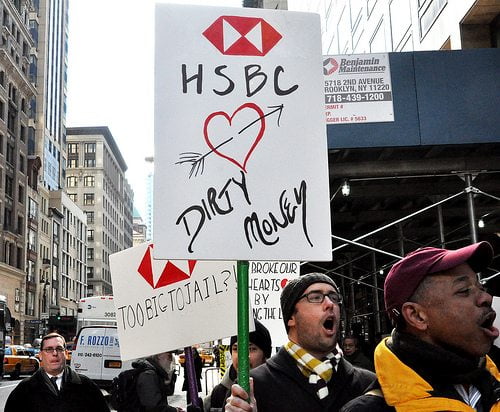 The banking regulator, the Financial Conduct Authority (FCA), has said that some of the biggest UK banks are still at risk of being used by criminals to launder money.

An analysis of 17 major financial institutions, including four based in the UK, found that around half had insufficient policies in place to clamp down on the illegal activity.

Speaking at an FCA conference, chief executive Martin Wheatley said, “It’s simply not acceptable for firms to turn a blind eye to where the money comes from, its journey from A to B.”

HSBC was fined a record £1.2 billion in December after it was revealed that cash from terrorists and drug lords in Mexico had passed through the bank. This represented just 1% of its market capitalisation.

After the fine, its “profoundly sorry” CEO Stuart Gulliver accepted responsibility for past mistakes and insisted the bank was a “fundamentally different organisation” when the illegal transactions took place.

In its review, the FCA said it was “considering where further regulatory action may be required” to deal with the recent spate of fines.

Speaking at his organisation’s AGM in April, Ecology Building Society chief executive Paul Ellis said, “Until this story broke, [HSBC] had been seen perhaps as one of the better guys. But it turns out that nobody in the bank had the slightest idea that money laundering was going on, and on a vast scale.

“One story reported that in one branch of HSBC in Mexico, they had increased the sizes of the teller windows in order to get the drug lords’ boxes of cash through. It seems that the whole organisation was unaware of this, which I think is a problem in itself.

“It translates into other forms of crime such as prostitution, and it translates into people’s lives being wasted by drugs. People are directly affected by this. This is not some technical infringement by some law. There are direct impacts on society, and on a very large scale.”

In a report published in June, the parliamentary commission on banking standards said the threat of prison sentences would give bankers “pause for thought” in acting in a reckless, irresponsible and unsustainable manner.