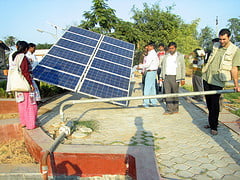 Clean technology investment in India increased by 52% last year – the highest growth figure in any significant economy in the world. Alex Blackburne looks into the Asian country’s tremendous, and increasing, development.

Investment in clean technology in India is becoming increasingly cost-effective, after the country recorded the world’s highest growth rates between 2010 and 2011, according to figures released by Bloomberg New Energy Finance (BNEF).

Clean technology investment in India increased by 52% last year – the highest growth figure in any significant economy in the world. Alex Blackburne looks into the Asian country’s tremendous, and increasing, development.

Investment in clean technology in India is becoming increasingly cost-effective, after the country recorded the world’s highest growth rates between 2010 and 2011, according to figures released by Bloomberg New Energy Finance (BNEF).

Ashish Sethia, head of India research at BNEF, said, “There was concern at the beginning of last year that increasing lending rates might hit investment.

“Policy measures like the Jawaharlal Nehru National Solar Mission, and renewable energy’s increasing cost competitiveness, have made this a record year”.

The Indian solar surge comes after consulting company, Bridge to India, predicted last year that the country could have as much as 33.4 gigawatts (GW) of solar power installed by 2022.

It was part of a five year plan, between April 2007 and March 2012, to install 12.4GW of grid-connected renewable energy – a figure that according to BNEF, it has already passed, with 14.6GW installed.

“The surge in installation of renewable energy shows that it is becoming cost competitive and scalable, at a time when India is struggling to meet its targets for conventional power capacity”, said Sethia.

“To carry this momentum forward on renewables, federal and state governments will have to ensure four things.

“First, that transmission lines are available for projects; second, that the grid can handle an increased flow of renewable energy; third, that renewable purchase obligations are enforced; and, fourth, that project developers are paid on time for the power they produce”.

It was suggested that Norway could help India develop its off-shore wind technology, whilst India could help Norway progress its solar sector.

As one of the world’s fastest growing economies, its 1.2 billion inhabitants currently live above the capacity of one Earth, meaning the country will soon be using up more resources than are readily available on the planet. This is called ecological overshoot.

And India isn’t even one of the worst offenders. If everyone lived as North Americans do, we’d need five planets worth of resources to support the population.

Figures suggest that by 2050, the whole planet will need over two times the amount of resources available in order to survive.

Concluding, Michael Liebreich, chief executive of BNEF, said, “India’s record performance in 2011, and the momentum it is carrying into 2012, is one of the bright spots in the clean energy firmament.

“With support mechanisms falling away in the US, the on-going financial crisis in Europe, and China already going flat out, it is gratifying to see some of the world’s other major potential markets coming alive.

“India is firmly in the lead group and we are seeing interest around the world in being part of what is unfolding there”.

Western Europe’s contribution to renewable energy investment, whilst improving, is still being overshadowed by unsustainable investment in finite resources.

Help make the much-needed shift by choosing wisely where your money is invested. To do this, ask your financial adviser or fill in our online form and we’ll connect you to a specialist ethical one.

If you think Blue & Green Tomorrow’s words are inspiration enough to make the switch to renewable energy, then go ahead and contact Good Energy, the UK’s only 100% renewable electricity supplier.