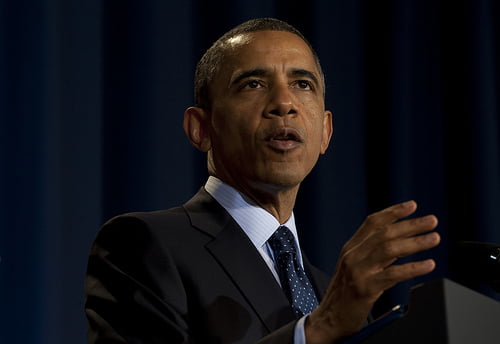 Barack Obama has said that a global failure to respond to climate change would mean “[betraying] our children and future generations”, as he embarked on a second term as US president.

Speaking at his public inauguration in Washington, Obama was vocal on America and the rest of the world’s environmental responsibilities – something that was noticeably absent during his election campaign.

“We will respond to the threat of climate change, knowing that the failure to do so would betray our children and future generations”, he said.

“Some may still deny the overwhelming judgment of science, but none can avoid the devastating impact of raging fires, and crippling drought, and more powerful storms.”

He also tackled the issue of renewables, saying, “The path towards sustainable energy sources will be long and sometimes difficult. But America cannot resist this transition; we must lead it.”

This particular sentiment is sure to be welcomed by a large proportion of the US public, after 89% of people that took part in a Sungevity poll in September said they wanted to see a greater emphasis on clean energy in their country’s future energy mix.

In his inaugural address as president in January 2009, Obama promised to “roll back the spectre of a warming planet”, and in his victory speech after last year’s election, said, “We want our children to live in an America […] that isn’t threatened by the destructive power of a warming planet.”

According to the Financial Times, the president had been “thinking long and hard about climate change” since beating Republican candidate Mitt Romney – widely regarded as a climate sceptic – in November, and the prominence of the issue in his second inauguration speech showed his renewed thinking.

He added, “We cannot cede to other nations the technology that will power new jobs and new industries – we must claim its promise.

“That is how we will maintain our economic vitality and our national treasure – our forests and waterways; our croplands and snow-capped peaks.

“That is how we will preserve our planet, commanded to our care by God. That’s what will lend meaning to the creed our fathers once declared.”

The Wall Street Journal has republished his speech in full here.