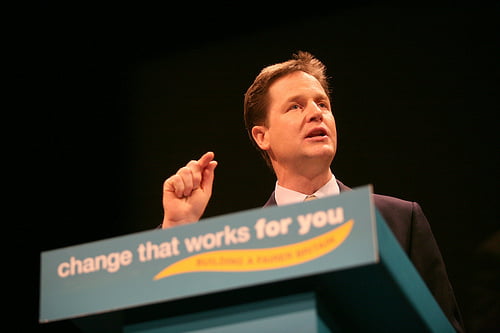 The Liberal Democrats “could win back lost voters” if the party stood firm on environmental policies, according to a poll by Friends of the Earth and Greenpeace.

The survey amongst 2,000 adults from Great Britain, found that 55% of people who voted for the Liberal Democrats in the 2010 General Election would do so again in 2015 if the party “took action to achieve carbon-free power in the UK by 2030”.

This is in response to the government’s so-called ‘dash for gas’ – a pledge led by George Osborne, who said that the fossil fuel would be “the largest single source of our electricity in the coming years” in his budget statement in March.

The chancellor also wrote a letter to energy secretary and Lib Dem MP Ed Davey calling for a greater emphasis on gas in Britain’s energy mix.

But the government’s independent adviser, the Committee on Climate Change (CCC), recently urged Davey to rethink gas’ role ahead of the publication of the energy bill, saying that a heavy reliance on it would be “incompatible” with the legally-bounding carbon reduction targets in place.

The Friends of the Earth and Greenpeace poll suggests that the Lib Dems could potentially play a big role in ensuring a greener, more stable future for Britain’s energy.

He added, “This is a wake-up call for the Liberal Democrats that standing up to George Osborne’s reckless push for gas will win them back voters.

“Ed Davey’s energy bill must contain a clear target for decarbonising the UK electricity sector by 2030 in line with the Climate Change Committee’s advice.

“If the energy secretary does not face down the anti-green chancellor, the country will fail to tackle climate change, create jobs or wean our economy off dirty and expensive fossil fuels and his party would be punished at the polling booth.”

Atkins also said that Davey “should resign” if the energy bill doesn’t include firm plans to decarbonise the power sector by 2030.

The Lib Dems received 6.8m votes at the General Election in 2010, just under a million more than in 2005. It is said that much of the increase came from the student population, after Clegg’s party made a promise not to raise tuition fees – a policy that was integral to its campaign for votes.

But after forming a coalition government with the Conservatives, the Lib Dems were forced to backtrack on this pledge, and fees were almost tripled to £9,000 starting from this academic year – something which Clegg came out and publicly apologised for through a YouTube video last week.

The party’s annual conference began on Saturday, and the poll by the pair of environmental campaign groups suggests that green issues are still very much central to many voters’ decisions.

“The Lib Dems have long sold themselves as being the greenest of the three main parties”, said Greenpeace political advisor, Joss Garman.

“In the coming weeks, Nick Clegg and Ed Davey will face their biggest environmental decisions to date, and this poll shows Lib Dem voters expect them to stick to their promises.

“The 2030 goal is crucial if the UK is to stabilise electricity bills, reduce emissions and drive job creation.”

Lib Dem MPs in the Department of Energy and Climate Change resisted challenges from the Conservatives over the Renewables Obligation banding review, which is hoped to bring £20-25 billion of green investment into the UK economy.