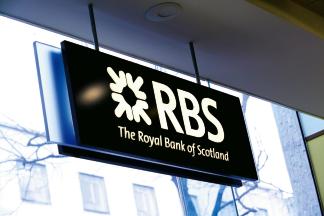 The Royal Bank of Scotland (RBS) is set to close 44 branches across the UK, 14 of which are the ‘last branch in town’. The move has been criticised by campaigners.

RBS is 81% owned by the taxpayer after being bailed out in 2008. Earlier this year it reported a pre-tax loss of £8.2 billion for 2013 but despite this, the company’s bonus pool stood at £576 million. The losses are a result of restructuring costs and misconduct fines.

The bank has said the closures reflect customers increasingly using other methods, such as online banking. It added that many of the  ‘last branches in town’ are only open for a few hours a week and see only one or two customers an hour.

A spokesperson for RBS said, “Banking has changed significantly over the last few years as more and more of our customers are banking with us where and when it is convenient for them.

“We have to adapt to what the customers want, which is why we’re investing in a range of other ways our customers can bank with us, including online and telephone banking, our mobile app, and in any one of the Post Office’s 11,500 branches across the UK.”

The news comes just months after RBS announced it would focus on UK customers and the economy.

Over the last year the bank has faced a number of fines for poor practices. This includes a £61 million fine for breaking US sanctions, a £28 million levy for an irresponsible sales culture and a £5.6 million fine from the regulator for inaccurate transaction reporting. The bank also faced penalties for its role in fixing the Libor rate.

In response to the announcement Charlotte Webster, campaign director at Move Your Money, said RBS has “consistently undermined” the interest of both its customers and taxpayers since being bailed out.

Webster added, “It’s no surprise, then, to see the bank let down its customers once again by upping sticks and leaving town – even where it’s promised not to do so.

“Banks of this scale just can’t be trusted to take its customer needs into account, even when the only reason it’s still around is because of our support. It just goes to show that RBS is no place to hold an account, and it’s time to move your money to a local or mutual provider.”