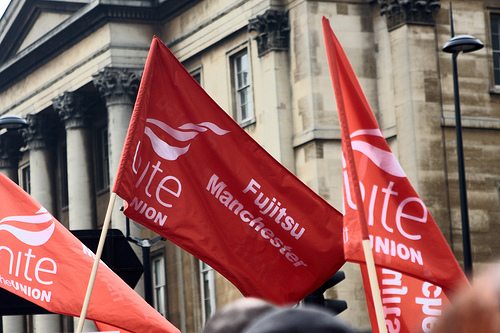 Unite, the UK’s biggest union, has launched a new credit union service in a bid to challenge payday lenders and other organisations that “[try] to make profit out of ordinary people’s financial hardship”.

The new service will be open to Unite members, who will be able to open savings accounts and access borrowing. The union argues that with typical annual percentage rate (APR) across the network around 27%, people could save around £685 on a £1,000 loan, when compared to rates from a payday lender.

Len McCluskey, Unite general secretary, said, “We are determined to wipe out rip-off payday lenders and ensure that they can’t make profits by exploiting victims of the financial downturn.”

He added that the new credit union service ensures that members are kept out of the “clutches of parasitic lenders”. McCluskey also accused the government of standing on the sidelines and allowing the “quiet crisis to intensify”.

Payday lender bosses were recently quizzed by MPs after allegations of bad practice emerged. The lenders were accused of using “inappropriate propaganda” to promote the use of their services and the committee will produce a report advising the government on how to regulate the industry.

The payday loan industry has been widely criticised, with Labour leader Ed Miliband saying the “Wonga economy” is one of the worst aspects of the so-called “cost of living crisis”. He vowed to force the industry to “pay back communities” if elected in 2015.

Labour MP Paul Blomfield, who recently launched a campaign against ‘rip-off’ lending, previously spoke to Blue & Green Tomorrow and said that the UK needed to learn from the tough regulations imposed in other developed countries.

A poll of Unite members found that on average, they were borrowing £200 a month, mainly from payday lenders, in 2011. The increase in the cost of living has led to this rising to £326 in 2013. Many consumers using payday loans are unable to afford the repayments. Research conducted by Which? in 2012 suggested that 57% of those that had used a payday loan had missed payments.

In order to curb the industry, Unite believes that the Financial Conduct Authority should have the power to cap the cost of credit at a rate that is found to be reasonable. The union also says that the government should determine a limit on the number of times a person can take out a payday loan before they are referred to financial adviser, and enforce a cap on the amount of occasions a person can roll over a loan.