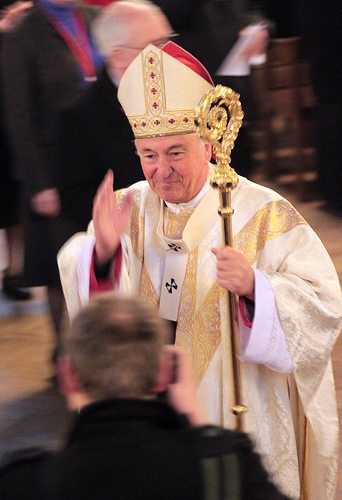 The Church of England has made one of its biggest political interventions in recent decades, openly criticising the prime minister for presiding over cuts to the welfare system that it says have pushed hundreds of thousands into poverty.

In an open letter to the Daily Mirror, bishops from the Church of England, along with other faith leaders, said that David Cameron had an “acute moral imperative to act” on a failing welfare system that was forcing many people to turn to food banks to feed their families.

“Britain is the world’s seventh largest economy and yet people are going hungry”, the letter says.

“We must, as a society, face up to the fact that over half of people using food banks have been put in that situation by cutbacks to and failures in the benefit system, whether it be payment delays or punitive sanctions.”

Twenty-seven of the 59 Church of England bishops added their signatures to the letter, along with 16 other faith leaders. They acknowledge that more than 500,000 people have relied on food banks for assistance since April.

Cameron responded to similar claims made by the most senior Roman Catholic priest in the UK, who condemned the need for food banks earlier this week, by saying the government was on a “moral mission”.

The church leaders challenged this however, saying, “We often hear talk of hard choices. Surely few can be harder than that faced by the tens of thousands of older people who must ‘heat or eat’ each winter, harder than those faced by families whose wages have stayed flat while food prices have gone up 30% in just five years.”

The letter concludes by calling on the government to act by ensuring a “robust last line of defence against hunger”.

Labour’s shadow work and pensions secretary Rachel Reeves said the government had penalised, rather than helped, those doing the right thing.

“This letter should be a wake-up call to David Cameron”, she said.

“His government’s policies are making life harder for families with a cost of living crisis making workers £1,600 worse off and the bedroom tax forcing hundreds of thousands to food banks.”