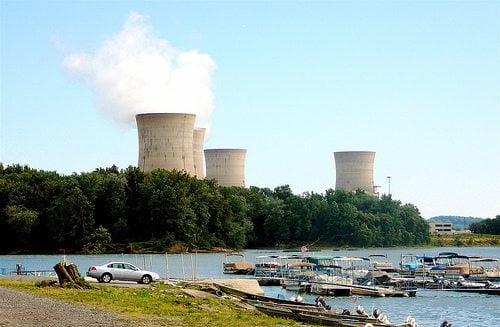 Thirty-five years ago today, the US was preparing to clean up, 24 hours after one of the worst commercial nuclear accidents of all time at Three Mile Island nuclear power station in Pennsylvania.

The accident – largely caused by human errors – was rated as an ‘accident with wider consequences’, and five out of seven on the International Nuclear Event Scale.

The US Nuclear Regulatory Commission (NRC) pointed towards “equipment malfunctions, design-related problems and worker errors” as the cause.

Despite the seriousness of the accident, the NRC stated, “In the months following the accident, although questions were raised about possible adverse effects from radiation on human, animal and plant life in the Three Mile Island area, none could be directly correlated to the accident.

“Thousands of environmental samples of air, water, milk, vegetation, soil, and foodstuffs were collected by various government agencies monitoring the area. Very low levels of radionuclides could be attributed to releases from the accident.”

The worst effects on the environment were avoided as only a small amount of the fission products released were solids at room temperature. However, even if the majority of studies agreed that the health effects on the local population had been minimal, almost $25m was paid to locals on insurance settlements. The clean-up operation finally ended in 1993, costing around $1 billion overall.

The accident remains an important incident for the nuclear industry, adding fuel to the arguments of those who opposed nuclear technology – particularly in the US.

Regulation because more detailed as a result of Three Mile Island, leading to longer construction times to address safety issues, while a stricter control over staff and technicians was also put in place.

Seven years after the Three Mile Island accident, the Chernobyl nuclear station in Ukraine exploded and is widely considered to be the worst nuclear disaster in history. Meanwhile just three years ago, the Fukushima plant in Japan suffered a similar fate, triggered by a tsunami.

Both have had lasting effects on the environment and local communities, and were rated the maximum seven on the International Nuclear Event Scale. While nuclear safety has undoubtedly improved in the 35 years since Three Mile Island, the potential for catastrophe has seemingly not been eradicated.