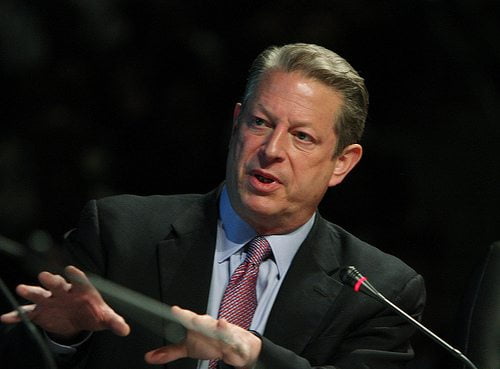 Former US vice-president Al Gore says he is optimistic about tackling global warming, as global politics has realised it is time for a “major shift”.

Gore – the star of one of the environmental movement’s seminal films, An Inconvenient Truth – said in an interview with the Washington Post on Wednesday that he’s optimistic that the world is making the right steps to defeating global warming.

He said exceeding 400ppm (parts per million) of carbon dioxide in the atmosphere in May represented the “global political tipping point”, with public’s perception of the issue amplified by the extreme weather events that have occurred over in recent years.

Gore explained, “The single most common criticism from sceptics when [An Inconvenient Truth] came out focused on the animation showing ocean water flowing into the World Trade Centre memorial site.

“Sceptics called that demagogic and absurd and irresponsible. It happened last October 29 [when Hurricane Sandy hit the US], years ahead of schedule, and the impact of that and many, many other similar events here and around the world has really begun to create a profound shift.”

He added that another reason to be optimistic was that electricity prices from renewable sources were decreasing and clean technologies were spreading worldwide, in conjunction with climate change policies such as coal taxes and emissions targets.

Gore said he is also seeing changing attitudes among his political peers, as extreme denial of climate change embarrasses many Republicans.

“Even though they’re not yet willing to come back to advocate constructive policies, there is definitely movement”, he said.

Climate change scepticism has to be fought as it has been for slavery, apartheid or homophobia, Gore added: “The conversation on global warming has been stalled because a shrinking group of [deniers] fly into a rage when it’s mentioned. It’s like a family with an alcoholic father who flies into a rage every time a subject is mentioned and so everybody avoids the elephant in the room to keep the peace. But the political climate is changing.”

He concluded, “Don’t get me wrong. We’ve got a long way to go. We’re still increasing emissions. But we’re approaching this tipping point.

“Soon we’ll get to the point where national laws will evolve into global cooperation.”