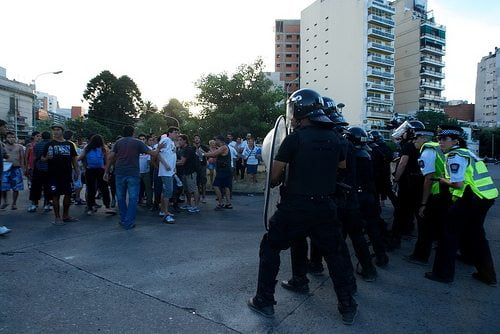 Argentinians take to the streets against Chevron

Protestors in Argentina clashed with police over the deal between US oil giant Chevron and the state owned company YPF to use oil and gas reserves in the province of Neuquen.

Around 5,000 workers, politicians, environmentalists and indigenous Mapuches have protested against the deal announced by President Cristina Fernandez de Kirchner, which will allow Chevron to exploit the Southern region in partnership with YPF.

The government have said that the deal will boost fossil fuels production, reduce the country’s reliance on energy imports and help overcome a ‘serious’ energy crisis.

However, the agreement has sparked outrage among citizens, who do not want the US company exploiting national oil and shale gas resources in the Vaca Muerta region.

Jose Castillo, head of the socialist left party told Press TV “Chevron has a history of human rights abuses and environmental damage. It represents US imperialism. The agreement says if Chevron causes environmental damages, it will be the YPF that will have to pay for it”.

Many also condemn the possible negative consequences of fracking on the environment and communities.

Julio Fuentes, secretary of the Association of State Workers said, “What REPSOL did before, Chevron will do now. That means contamination of our natural resources and serving the interests of transnational companies.

“The project will destroy the country’s largest freshwater basin. Water is more important than oil, and that is what these people are worried about.”

Chevron will invest $1.24 billion (£800 million) to drill around 100 wells in Neuquen. The oil firm said that the joint venture with YPF is ‘risky’ but worth it because of the huge natural resources that can be exploited.