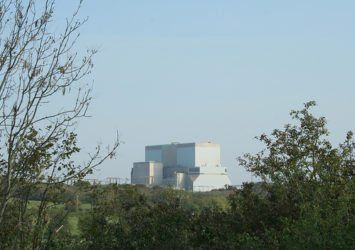 Today French state owned company EDF made the long awaited ‘final investment decision’ with its Chinese state owned partners to spend over £21 billion building Hinkley Point nuclear power station in Somerset. 10pm Update: From BBC News: “Contracts were to be signed on Friday. But Business Secretary Greg Clark has said the government will “consider carefully” before backing it. According to reports, EDF’s chief executive Vincent de Rivaz has cancelled a trip to the UK on Friday following Mr Clark’s comments.”

Dr. Nina Skorupska CBE, Chief Executive of the Renewable Energy Association commented: “This decision defies logic, the energy world has fundamentally changed in the decade since the decision on new nuclear was made and the fundamentals of this project no longer stack up. In those ten years, nuclear costs have rocketed, whilst the price of renewables have dropped spectacularly and from a standing start now produce 25% of the UKs generation.

“Technologies such as solar, onshore wind and biomass are already cheaper than nuclear, are quicker to deploy and has none of the construction or economic risk. Assuming that EPR technology can ever be made to work and does deliver in 2026, it will be obsolete well before it’s opened. We are seeing grid-scale battery storage already being deployed commercially in the UK this year, coupled with smarter grids and technology driving up efficiencies.

“The pace of technological change in the last decade has simply left this project behind, a relic from another time. In another ten years it will look preposterous, and then we are stuck with the extraordinary costs for another 35.”

Also responding to the news Good Energy chief executive Juliet Davenport OBE said: “Giving the go ahead to Hinkley C is a bad move. It will take at least a decade to build and leave our grandchildren an inheritance of high energy costs, hazardous waste, environmental damage, and a plant that needs complex and costly decommissioning. No wonder only 36% of the British public support nuclear, compared to a whopping 76% for renewables. The same future generations that will blame us for Hinkley, could instead thank us for a legacy of investment in renewables. The transition to renewables is inevitable and brimming with economic opportunity – the UK should embrace it and move forward with a clean, green energy plan.”

ClientEarth Director of Programmes Karla Hill said: “This deal is less than visionary and centralises the UK’s power production even more when the government should be creating a decentralised energy system for the future. What is more, state support for this project is the subject of two ongoing legal cases. We need strong, positive policies on renewables and energy efficiency, rather than relying on big, centralised and heavily subsidised projects like Hinkley.”

Richard Black, director of the Energy and Climate Intelligence Unit (ECIU) said: “What’s really striking about Hinkley is that EDF and the French government aren’t just betting the farm on this project, they’re effectively betting the entire hillside, the river at the bottom and the next few hillsides as well. With similar reactors in France and Finland seriously over time and over budget, France needs a Hinkley success if it’s to persuade anyone in the West that it’s still a serious player in the global nuclear industry. So it’s a risk worth taking for France; but is it for Britain? In a world moving towards cheaper, flexible, decentralised power systems, investing in eye-wateringly expensive always-on ‘baseload’ power plants increasingly looks like a 20th century solution for a 21st century problem.”

Hugo Chandler, director at New Resource Partners, agreed that it wasn’t clear that the project would be ‘good for the UK’. “This may be good for confidence post the referendum, and good for jobs, and it’s something of a relief to know one way or the other, but it is still not clear that it’s good for the UK. The fact is that Hinkley C’s electricity will be very expensive, as will management of its waste, and we still don’t have a long-term solution for that,” he said.

“When Hinkley C finally does come online it will indeed produce low-carbon electricity, but not as cheaply as offshore wind. And it will need to generate around the clock to justify the cost of building it. Then if more reactors follow, we will have a fleet of inflexible behemoths that do not fit well into a market with lots of variable wind power. We need more flexibility, not less. If Hinkley C takes as long to build as Olkiluoto 3 in Finland, also an EPR and 9 years late, it may be born into a system that has outgrown nuclear power altogether.”

John Sauven Greenpeace Executive Director said: “Every time EDF has tried to build a reactor like Hinkley, it has failed. There isn’t a shred of evidence that Hinkley can be built on time or on budget. And if it hits the same problems as its predecessors, it can’t be relied on to keep the lights on in the UK. There is no way that Hinkley can deliver power by 2025 which is already 8 years later than originally promised. And it is costing many more billions in subsidies than initially thought.

“The UK government doesn’t have to sign the contract with French and Chinese state owned companies. The government should make the sensible and pragmatic decision to quit while we’re still ahead. We need a clean break from Osborne’s pet projects.

“The new government should have the vision to come up with a serious plan to boost our energy infrastructure that will keep the lights on and the costs and carbon emissions down. This isn’t going to be delivered by outdated nuclear technology and handing over the keys to our energy system to companies associated with the Chinese military.”

Tony Ward, Head of Power & Utilities at EY, comments: “Today’s announcement by EdF’s board is a major vote of confidence in the UK’s energy market, and in the vital role that new nuclear will play in delivering the UK’s low carbon aspirations. The decision to proceed with Hinkley is also a major fillip in terms of long-term highly skilled employment, supply chain opportunities, and economic improvement in the local West Country region.

“Investment decisions in major, nationally significant, infrastructure projects are rightly taken only after due care, scrutiny and challenge. In the case of Hinkley, its scale has also required the drawing together and commitment of EdF’s Chinese partners, and negotiation of appropriate support from the UK Government.

“We should recognise that the UK’s electricity system is changing rapidly, especially in the transition to a more distributed, diverse mix for our power generation. However the robustness and reliability of the system as a whole will still demand large-scale base-load power. Today’s announcement is the start of a process to replace some of the existing low carbon nuclear capacity that the UK has already closed, and more that will close in the years to come.

“Much preparatory work has already been done, with many contractors and partners in place. The challenge now shifts from getting the project structured to that of delivering to time and cost.”

Dr Jenifer Baxter, Head of Energy and Environment at the Institution of Mechanical Engineers, said: “Confirmation that Hinkley Point C will go ahead does not provide the UK with an answer to the management of power generation, potential generation gap and the need to balance the grid.

“Given the UK is facing a 40-55% supply gap by 2025, the UK Government must put in place clear guidance for developing near and long term sustainable power generation that meets the needs of UK carbon targets, creates a good mix of low emission technologies and develops skills and economic growth in the sector.

“The UK Government must now have a flexible vision of our nuclear future due to the potential opportunities that could be offered through innovation and demonstration projects. The experience of those involved in developing Hinkley Point C should be used to get the most out of other developments in the nuclear sector, such as small modular reactors. This will build up a bank of shared experience, best practice and opportunities for learning.

“Further ahead, it is vital is for there to be more investment into the management of the whole nuclear life-cycle. We need more thorough research and development into methods for recycling and maximising the energy returns from nuclear waste ― including the growing stockpile at Sellafield.”