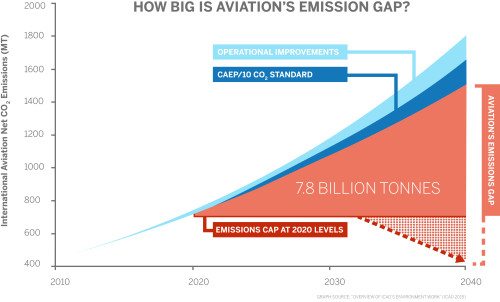 The International Civil Aviation Organization (ICAO), the United Nations (UN) decision-making body charged with regulating aviation emissions, takes up the issue in September. If it fails to take bold steps, aviation emissions are projected to triple by 2050. Aviation, a top-ten global polluter, was not directly addressed in the landmark COP21 Paris climate agreement agreed to 100 days ago today.

In response to the growing urgency to address aviation emissions, FlightPath 1.5 is focused on ensuring that ICAO and its 191 Member States adopt a meaningful new agreement in 2016. The time window for action is tight: October 7, 2016 is the last day of the two-week ICAO Assembly, and the next Assembly won’t happen again for another three years. Inaction by ICAO threatens to directly undermine efforts to limit planetary warming to no more than 1.5°C. The Paris Agreement set the 1.5°C target to avoid a climatic tipping point of irreversible climate impacts.

FlightPath 1.5 calls for capping and cutting emissions of the entire international aviation sector and is advocating for an aggressive and transparent ICAO deal that:

Initially caps net carbon emissions of international aviation at 2020 levels;
Encourages airlines to meet the cap by cutting their own emissions and lets them use market-based measures as well – but only if those measures deliver high-quality emission reductions and low-carbon biofuels that promote sustainable development; and,
Reviews the cap regularly, so that over time, aviation’s climate pollution can be ratcheted-down in line with the Paris target.
In the lead-up to the ICAO General Assembly, FlightPath 1.5 will spend the next 200 days urging world leaders to confront the aviation emissions climate gap and educating the public about the importance of this unaddressed issue. The campaign is spearheaded by the Aviation Environment Federation, Carbon Market Watch, Environmental Defense Fund, The International Council on Clean Transportation, Transport & Environment, and World Wildlife Fund.

James Beard WWF-UK’s climate change specialist said: “The Montreal ICAO meeting this autumn must match the ambition shown in Paris if we are to achieve the climate goals that 197 countries signed up to just 100 days ago.

“The Government played an important role in Paris and we urge UK climate and transport ministers to keep up this momentum in the lead up to the Montreal talks.

“The aviation industry has to play its fair share in reducing greenhouse gas emissions. It’s time for ICAO to plot a flight path towards the 1.5oC climate target agreed in Paris. Any use of biofuels and carbon credits will have to achieve real emissions reductions and lock in sustainable development.”

Brad Schallert, Senior Program Officer for International Climate Change Policy at World Wildlife Fund (WWF) said: “World leaders committed to a 1.5°C target in Paris to safeguard families and communities from the impacts of climate change. Now, countries need to fulfill their Paris promises by ensuring that the aviation industry does its fair share. ICAO’s draft global market-based measure is an important step in reaching agreement in October, but the text does not currently align with the environmental goals of the Paris Agreement. Governments should come together over the coming months to improve it.”

Tim Johnson, Director for Aviation Environment Federation said: “Curbing aviation emissions will require more than currently available technological improvements, making a market-based measure an essential tool to efficiently incentivise the industry to achieve deeper cuts. We can’t assume that the biofuels and other radical technological breakthroughs will automatically materialize and put aviation on a flightpath in line with 1.5°C. A well-designed market-based measure is the safety net the aviation industry needs.”

Bill Hemmings of Brussels-based Transport & Environment said: “The agreement in ICAO must be a starting point, not the end, of greater ambition in Europe. With the EU having committed to a 40% emissions reduction by 2030, all sectors including aviation must contribute. The ICAO Agreement must recognize the need for developed countries to do more, and Europe must take up the baton with more effective measures to reduce the rapid growth in the emissions of its aviation sector.”

Annie Petsonk, International Counsel at Environmental Defense Fund said: “The recently proposed CO2 aircraft standard won’t drive emissions down in this fast-growing sector. U.S. President Obama and Canadian Prime Minister Trudeau just announced their commitment to get a deal at the ICAO Assembly this year. We call on them and other world leaders to agree a market-based measure that truly delivers.”