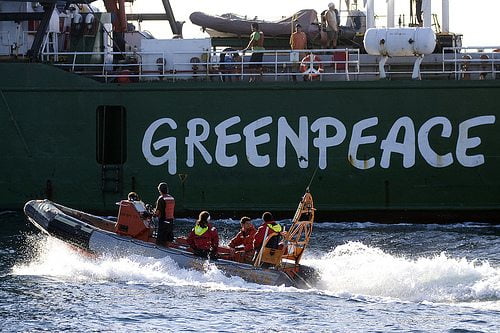 Five of the six Britons detained by Russian authorities for 100 days after a Greenpeace protest at an Arctic oil rig have arrived back in London.

Anthony Perrett, Alexandra Harris, Phil Ball, Iain Rogers and Kieron Bryan were welcomed back to the UK at St Pancras International on Friday afternoon. They had flown from St Petersburg to Paris, before finishing their journey by Eurostar. The sixth Briton, Frank Hewetson, has also been freed but is travelling to another country.

The six were among 28 Greenpeace activists and two journalists held by Russian authorities since a peaceful protest at the Prirazlomnaya oil rig in September.

The so-called ‘Arctic 30’ were originally charged with piracy, and then hooliganism, and faced years in prison. However, last week, the Russian parliament voted 446-0 in favour of an amnesty bill that included the Arctic 30, meaning the 26 non-Russians among them would be able to return home as soon as they received exit visas.

Harris said the activists’ lengthy detention was “a complete over-reaction on the part of Russia”.

She added, “There was no physical violence towards me but it was torture – we spent two months in a Russian jail cell and 100 days detained for a crime we didn’t commit.”

Despite saying he was looking forward to going for a walk in the woods, once back home in Wales, Perrett argued that the experience had been worth it.

“I think we brought the world’s attention to the fate of the Arctic and that’s difficult to do because it’s so far north”, he told the Guardian.

“All the science is telling us that if humanity carries on as it is doing, in 1,500 years the planet will be dead. I don’t know how big a price you have to pay for that. The price we paid was jail, and Christmas away from home in Russia.”

An international campaign backing the Arctic 30 saw protestors unite in 46 countries, as over 2.6 million people wrote to Russian embassies calling for their release. Supporters included famous faces such as Jude Law and Vivienne Westwood, and Nobel peace prize laureates such as Desmond Tutu.

Greenpeace has vowed to return to the Arctic to step up its efforts to prevent oil companies exploiting the region, though director John Sauven hinted that they might change their tactics.