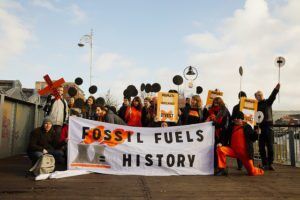 Following today’s report released by Committee on Climate Change regarding UK climate action after Paris agreement, Friends of the Earth have criticised the advice given that it’s too early to adopt stricter climate change targets.

Friends of the Earth chief executive Craig Bennett has said:

“This is very disappointing. The Committee on Climate Change should offer advice on carbon budgets based on the scientific evidence, not what feels politically expedient.

“What sort of message will this send to the rest of the world if Britain, once a climate leader, offers only delay on one of the central tenets of the Paris Agreement less than twelve months after it was signed?

“It’s no surprise that the government’s approach to climate policy is failing. A child could tell you that building new runways, allowing new open-cast coal mines, and forcing fracking on local communities, while doing precious little to support renewables or energy saving, isn’t going to help us limit temperature rises to 1.5 degrees.

“But it’s Government policy that needs to change and fast, not just the targets”.

The CCC also published reports today on the implications of ‘Brexit on climate policy’ and the ‘next steps for UK heat policy’.

“Neither hard nor soft Brexit will stop increasingly intense floods, storms and droughts. We need to get on with cutting pollution and making our economy more energy-efficient, whatever the outcome of the Brexit negotiations. Keeping existing EU policies at least as strong as present is the lowest bar for UK action.

“In the EU or out, it is only by cutting our use of gas, coal and oil that we can reduce the growing risks people face from more intense floods and storms.”

“The CCC is right to highlight the crucial importance of stronger action on homes. Unfortunately government policy on decarbonising our homes is so inadequate it should be condemned for demolition.

“Helping people insulate their homes would cut bills and pollution, and should be a top-priority for climate and health action.”