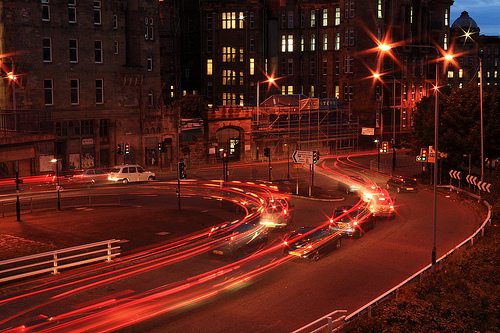 Street lights which can stop crime and save power are to be trialled in Scotland’s biggest city.

New generation lighting in Glasgow will have sensors attached to columns to record noise and movement, allowing disturbances to be fed to emergency services in real time. The lights also get brighter in reaction to rising noise levels and can be programmed to flash, guiding emergency services to the incident location faster.

The trial forms part of the £24m Future City/Glasgow project to demonstrate how technology can improve urban life.

Glasgow beat off stiff competition from 30 other UK cities in January this year for the funding, which is hoped will be used to enact its smart city plans in time for next summer’s Commonwealth Games.

The new smart lighting project can help eradicate crime and perceptions of fear in the city’s toughest neighbourhoods.

What’s more, energy-efficient LED lamps will be used so that brightness can be increased at specific times when more lighting is needed, such as for events like outdoor football or street festivals.

They can also provide low-cost lighting for currently unlit, off-road cycle paths to increase safety and encourage more cycling. This would boost healthy activity in socially deprived areas. The brightness would change from 40% to 100% as an approaching cyclist was detected.

Similar power-saving technology is already used on escalators on the Glasgow subway, which run very slowly while unused and increase to normal speed when someone steps onto them.

The sensors installed on lighting columns will also record air and noise pollution, and the number of people using pavements. This information can then be fed into and accessed via a public website.

Collating this data can help town planners learn about how people are using the urban environment and design better future solutions.

Keith Irving, head of pedestrian campaigner group Living Streets Scotland, said, “Sensors providing additional data on footfall, as well as pollution, will help local shops and is essential in supporting our town centres and monitoring the quality of our local environment.”

But he also said, “We would question, though, why these new street lights should automatically get brighter or start flashing in the event of increased noise – that would perhaps only encourage a bit of midnight merriment.”

The potential for people to abuse this new technology would make it impractical and waste the emergency services’ valuable time.

However, the social and environmental benefits of smart lighting could be huge in places which have long-suffered from dwindling resources and inadequate architectural design.

No locations for the current trial have been announced in what is Scotland’s first of its kind. But the future is bright and Glasgow is lighting the way for the rest of Britain’s urban centres to follow suit.