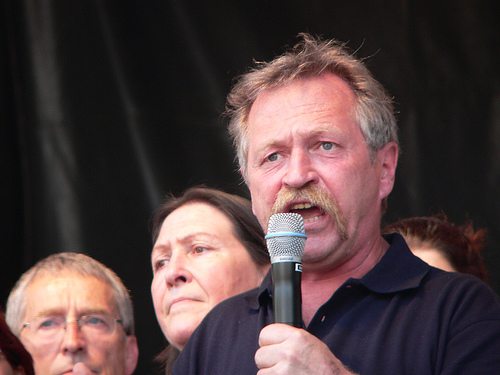 Outspoken Green MEP Jose Bové has said he is prepared to fight against energy giant Total on the issue of fracking in the UK, after successfully defeating the practice in his native France.

The French politician, who has been imprisoned twice for taking part in campaigns against General Motors (GM) and McDonald’s, said that he would help Britons campaign against shale gas extraction.

Speaking at an event in London, Bové said that he would be fighting for a moratorium in Europe, where he sits as an MEP.

“We clearly need a moratorium at the European level against fracking”, he said.

“If needed, I will come to be in front of the police in Britain. I fought against Total, I know them. They tried to frack in France but we defeated them. I am happy to resume the battle here”.

French firm Total was banned from fracking in France after French president François Hollande said he would not support the controversial method of extracting shale gas from rocks, following a ban on shale drilling permits.

Last week, the firm announced a £30m investment in shale exploration in the UK. David Cameron also unveiled new measures that would see councils up and down the country retain 100% of business rates. The measures were criticised by environmental campaigners, who dubbed the incentives “bribes”.

In the same speech, Bové also attacked Cameron, saying that he “is the best agent for the far right in Europe”. He also branded the prime minister a “disgrace”.