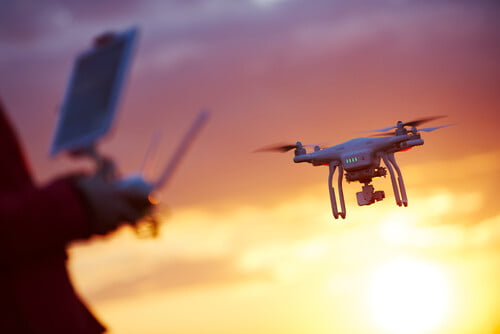 How Drones Are Lowering The Cost Of Clean Energy

The shift towards clean energy is becoming the goal of many people and industries around the world today. Even though we have already found many clean energy sources, like solar, wind and water, renewable energy is still under development which means that we can expect to see more innovative clean energy technology soon.

Solar and wind power, for example, are bringing us clean energy to our homes and businesses, but the technology and methods to make this possible are still very costly. The production, inspection and maintenance process of such developments can become very time consuming and expensive. One of the ways this problem is being addressed is through the development of other innovative technologies, for instance, drones.

Toy drones have been making way into many people’s homes over the last couple of years, but the first air vehicle (which we call drone today) was built during the first world war for war-fighting purposes. Today, the potential of drones are enormous! Drones are making way into many businesses, benefiting them in various ways. Drones can lower the cost of labor, save time, avoid risky situations and much more.

How Are Drones Improving the Solar Sector?

Solar companies are claiming that the time to measure residential solar systems can be reduced by up to 50 percent when using a drone. Some companies have also started to use drones to measure commercial solar systems and have found that it only takes minutes via a drone whereas the older methods would usually take several days.

Another plus side of using drones to assist in the maintenance of solar systems is that drones provide onboard thermal imagery. This imagery ensures that equipment is in the optimal position which allows maximum production. Drones do not only help solar companies improve their performance but the overall roofing industry as well, as they eliminate the use of measuring tapes and survey wheels.

How Can Drones Be Used in the Residential Solar Industry?

Drones can be controlled through a device like a smartphone which allows solar installers to control the drone easily. The drone technology collects data and sends it to the DroneDeploys cloud-based infrastructure. This means that it saves times as workers do not have to climb up the roof which also avoids the risk of falling and injuries are being.

Drones are very accurate which allows solar companies to obtain the correct measurement every time. With fast execution and precise information, it is quite apparent why the installation cost for rooftop solar will get lowered when using a drone. Furthermore, expensive mistakes will also be avoided.

How Can Drones Be Used in the on Solar Farms?

Certain renewable electric companies are also testing the use of drones together with infrared cameras. Up until now, utility workers have to conduct inspections by walking through the solar farm. With infrared cameras mounted on a drone, malfunctions will be able to be detected in solar panels, enabling faster repairs. This will increase the electron production as flaws will be found fast and be repaired sooner.

How Can Drones Be Used in the Wind Sector?

When wind turbines are being inspected close-up, the turbines need to be stopped from turning. The process is followed by hooking workers up to cables and hanging them off the turbines. A big turbine being put on hold means that less energy is being produced while workers need to kick their fear of heights in the butt.

However, if more companies deploy drones for the inspection process, the process will be a lot faster and less expensive. Drones can fly close to the moving turbines and take 3-D images of wind blades. This gives an accurate indication of any imperfections.

How Is Drone Technology Improving?

Drones have made significant progress over the years, and some are being specifically developed for inspection reasons. For instance, some 3-D modeling, ultraviolet drones that carry thermal sensors can detect hotspots on the grid. The still camera in such drones has a sub-millimeter resolution which can show the smallest errors, for example, it can even detect something as small as splinters in the wind blade. These high-tech drones are already making their way on the market.

So What Is The Hold-Up?

Specific area regulations were making these high-tech drones challenging to deploy. For these drones to hit-the-sky, more regulations need to be lifted.

Luckily the rules are starting to change, as certain guidelines already got approved in several countries which proves that drones can be operated safely when they go beyond the visual line of sight. The BVLOS (beyond the visible line of sight) rule which is being lifted for individual owners and operators of critical infrastructure is a big step towards lowering cost in clean eco-friendly energy.

When it comes to the maintenance of clean energy sectors, people are more expensive to employ than drones. Furthermore, drones also improve the efficiency of clean energy as they are accurate and fast. Any risky situation can be avoided by using a drone as well as expensive mistakes and the security of clean energy infrastructures can be improved by using drones at a lower price.

Mattea Jacobs is a freelance writer who mostly writes about both interior and exterior home design, and environmentally-friendly ways to improve homes. She is also a green activist and a mother of two beautiful sons. You can reach her on Facebook and Instagram.