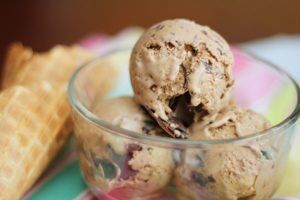 Inedible ice cream waste is now being used as a new source of green energy to heat homes in the UK.

Not only is chocolate ice cream one of the nation’s favourite flavours, but it has also emerged as the most powerful flavour for green energy too. This is following an innovative project involving the world’s third largest ice cream manufacturer, R&R Ice Cream, Iona Capital and resource management company, Veolia, in which ice cream by-product is being turned into biogas for the National Grid.

The by-product consisting of sugar, fat and protein, which is left behind after production line cleansing, is to be transformed into biomethane, a biogas. This will then go to the National Grid to heat UK homes, thanks to the nearby Anaerobic Digestion (AD) facility funded by Iona Capital and operated by Veolia.

The R&R factory, based in Leeming Bar, North Yorkshire, is the UK’s largest producer of own label ice cream as well as top brands such as Nestlé’s Fab, Rowntrees’ Fruit Pastille lollies, Cadbury’s Dairy Milk chocolate sticks, Oreo ice cream and Yoomoo frozen yogurt, and now what’s left over from the production of these sweet treats will help power local homes.

So how does it work?

The transformation process resembles the human body burning calories, and like our bodies different flavours of our favourite frozen dessert amount to different levels of energy.

Estelle Brachlianoff, Senior Executive Vice President, Veolia UK & Ireland states: “This summer will see the UK’s energy mix take on a new flavour, and a delicious one at that. And even better, now there’s less reason to feel guilty about that extra mouthful of ice cream because, rest assured, none of production by-product is going to waste, as we are busy creating renewable energy with it. It’s innovation like this that is needed to ensure the UK meets the Government’s 2020 targets, and something we’re hoping to build on.”

This project is a prime example of using creative thinking to turn waste into green energy.

Mike Dunn, Director of Iona Capital, adds: “Green infrastructure has the Government’s backing and it is an area that we are seeing more and more investors taking an interest in. This is especially true with local authority and public sector pension funds who want to show their members they are investing responsibly.”

The raw material that goes into this facility would otherwise be discarded and sent to landfill, now it is now only avoiding landfill but the by-product that is leftover at the end of the AD process is a nutrient rich fertiliser that can be distributed to farms to improve crop production.

The facility, which is one of the largest gas-to-grid energy plants in the UK, is now fully functional, and will contribute to the Government’s target for 20% of the UK’s energy generation to come from green energy by 2020.