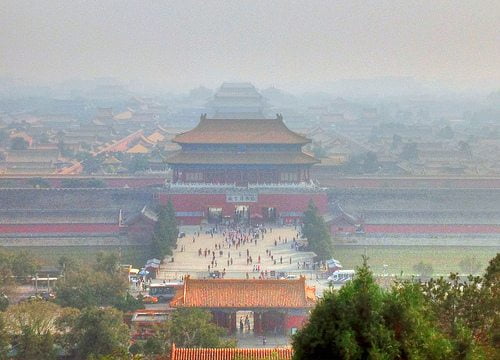 Disregard for pollution law from China, the world’s largest greenhouse gas emitter, is having destructive effects on the country’s rivers and land – not to mention its citizens and its long-term prosperity.

China relies heavily on coal-fired power plants to provide energy to its cities and businesses. This, combined with heavy traffic, has led to alarming levels of air pollution in major Chinese cities, including Beijing, Shijiazhuang, Xingtai, Harbin and Shanghai.

The concentration of smog means that most citizens are forced to stay indoors, or else risk increasing their chances of contracting respiratory or cardiovascular diseases – or in some cases cancer, like the eight-year-old girl who was diagnosed with lung cancer in November.

In January, Beijing smog levels were reported to be 25 times higher than the limit considered safe by authorities, in a crisis that continued well into February.

Officials say thousands of people die prematurely every year in the country because of the poor quality air. Industrial pollution is so high that it is spreading to nearby Tokyo and Seoul.

Pollution is poisoning the land, making it unsuitable for agriculture, and it’s also contaminating waterways. Earlier this month, a river in the city of Wenzhou was literally set on fire by a discarded cigarette – as years of industrial spillage had made it flammable.

Some businesses are fleeing the country as a result. A survey by the American Chamber of Commerce in Beijing said many firms are finding it difficult to send top executives to work in China because of the pollution issues.

Japanese electronics company Panasonic announced it would pay workers more if they agreed to go to China, as compensation for the poor air quality.

The country truly needs to ask itself how long it is prepared for its citizens to pay, in their health and wellbeing, for the lack of industrial regulation and the reliance on dirty energy. Forbidding fireworks at new year celebrations really does not sound like the right answer.

However, we must acknowledge some small but encouraging signs. The government has decided to slow down coal production, while encouraging green investment from overseas.

It strengthened the environmental law on companies that do not follow the current legislation – even using drones to spy on polluting industries – and has prepared £990m worth of incentives for those that agree to clean-up their operations.

Wang Jinnan, deputy head of the Chinese Academy for Environmental Planning, has said that China should prepare to pay £177 billion to clean up its industries and promote clean energy, while the government is considering promoting thorium-based nuclear energy to replace the outgoing coal plants.

There is still a lot of work to do – and perhaps too much considering the current climate and warming predictions for the end of the century.

One thing is sure though: China has massive potential in terms of resources – both human and natural. It also has an enormous pollution problem. It needs to use the first to solve the second.

Some officials may say the country is not prepared to tackle climate change, but a recent study suggested it could have quick, sustainable and green growth simultaneously. Above all, it just needs to be brave.