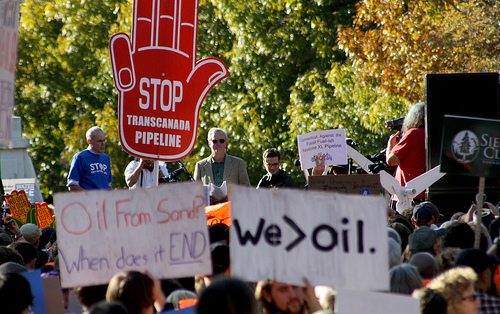 The Keystone XL pipeline would transport 800,000 barrels of oil per day across 1,660 miles from Alberta to Gulf Coast refineries. The project was first proposed in 2008, and had been originally scheduled for completion in 2013.

However, the development first needs the go-ahead from the US State Department, as it crosses the US-Canada border. President Obama’s administration has so far delayed this decision.

The new report, by the thinktank Carbon Tracker, now warns that the improved oil prices promised by Keystone XL may be offset by increasing production fees, carbon offsetting costs and expenses incurred in the construction of the pipeline.

If the US government were to approve the pipeline, the report adds that the increased capacity and revenues that Keystone XL would bring would encourage further expansion.

“Keystone XL will improve returns in the short-term, which means that it will help catalyse new investment, more oil-sands production, and additional greenhouse gas emissions”, said Mark Fulton, a co-advisor on the report.

This, the researchers suggest, would put upward pressure on costs in Alberta, and soon exhaust the additional transportation capacity the pipeline would provide, further depressing prices.

Best known for its Unburnable Carbon study, which says 60-80% of fossil fuel reserves need to be left in the ground if the world wants to tackle climate change, the Carbon Tracker Initiative’s latest report adds that investing in Keystone XL is incompatible with climate targets.

“Oil sands are high-cost, high-carbon projects, being proposed at a time when both costs and emissions are under pressure to shrink; as such they should immediately hit an investor’s higher-risk screen”, said James Leaton, research director at Carbon Tracker.

Environmentalists have long opposed the project, saying it would increase the risks of devastating oil leaks and commit the US to even more polluting energy sources.

Tar sands, or oil sands as they’re also known, works by turning bitumen into oil by digging it out of the ground through a highly-carbon intensive process.

In June, Obama said the pipeline should only be approved if it “does not significantly exacerbate the problem of carbon pollution.”

However, former vice-president Al Gore said, “This should be vetoed. It’s an atrocity, it’s a threat.”

Speaking in October, Gore compared the US’s consumption of fossil fuels to a drug addiction.

“Junkies find veins in their toes when their arms and legs go out”, he said. “We are now at a point where we are going after dangerous and dirty fuels.”