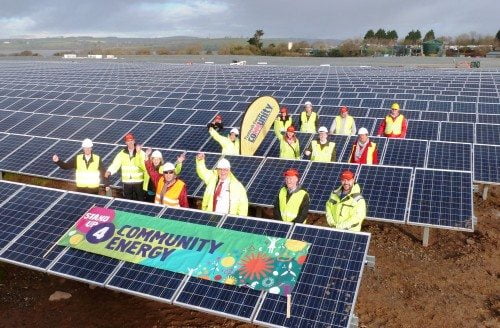 Leapfrog Finance is proud to announce its funding of the construction of a 4.1MW solar project co-developed by Plymouth Energy Community (PEC) and Communities for Renewables CIC. The brown-field site is located in Ernesettle, North West of the city centre, on the river Tamar, between a sewage works and a Royal Navy munitions depot. The project will generate income to support the work of PEC, tackling fuel poverty, and The Four Greens Community Trust (FGCT), where part of the trust’s role is to create local jobs, enterprise and training, for an area with traditionally low economic participation.

Leapfrog Finance was launched in 2015 with a fund of £15m from Big Society Capital. Its mission is to fund the construction or acquisition of community energy projects that deliver positive social impact for local communities. Leapfrog was supported on the Ernesettle deal by Louisa Cilenti at Lux Nova Partners and Mark Stewart and Jamie Davidson at RSM International.

PEC’s primary mission is to give the people of Plymouth the power to transform how they buy, use and generate power in the city. In essence, it’s all about people power, focusing around three core energy goals: reducing energy bills; improving energy efficiency; generating a green energy supply in the city. Alleviating fuel poverty is an integral part of achieving these goals.

The Four Greens Community Trust (FGCT) is a new trust, serving the areas of Ernesettle, Honicknowle, West Park, Manadon and Whitleigh in the north of the city where there is a high concentration of low wages and deprivation.

Communities for Renewables (CfR) CIC provided risk investment, commercial advice and project management support and worked with the PEC team to deliver the project through feasibility, development, procurement and financing.

Pfalzsolar played a major role in the technical and economic success of the project. In 2015 alone, the 100% subsidiary of a German community and local authority owned energy supplier, Pfalzsolar constructed photovoltaic projects with an overall capacity of 35.5 megawatts, half of which was in the UK. Pfalzsolar has planned, built and operated photovoltaic plants since 2003, and is a committed partner for investors, commercial and private customers, and especially for communities.

Richard O’Rourke, Managing Director, of Leapfrog Finance said: “This project exemplifies wonderfully what can be achieved through community-owned renewable energy assets, and is a model for what Leapfrog Finance wants to deliver through its fund. Forecast to deliver over £1m of community benefit over the life of the project, delivering social impact across a wide spectrum of issues in the community, it’s a model we’d like to see replicated across the country.”

Candice Motran, Investment Director at Big Society Capital, said: “Across the UK we are seeing a growing number of communities coming together to develop energy projects. These are not only tackling issues such as fuel poverty, but also creating sustainable income streams for those communities at a time when grants are dwindling. Leapfrog Finance are experts in this area and have done a fantastic job in supporting this project to fruition. We hope that Plymouth Energy Community will inspire other organisations to think creatively in the future.”

Alistair Macpherson, Chief Executive at Plymouth Energy Community, said: “We are hugely proud to be watching our solar farm come to life.  This was the project that many said would not be built; and to see it realised is a great credit to those that have had the vision to support us. Plymouth City Council, CfR, PfalzSolar, and Leapfrog Finance, should all take a bow in this regard.  Local residents have been at the heart of this project from the outset and Leapfrog’s construction finance keeps alive our chances of it remaining a long term community asset.”

Tom Cosgrove, Development Manager at Communities for Renewables CIC, said: “We have gone from feasibility to commissioning in 12 months, and have overcome some big challenges along the way, including Government policy changes that threatened the viability of keeping the project in community ownership. It has been a mammoth effort from all involved and the team has worked really well together. The Ernesettle solar project is a great legacy for Plymouth and a flagship community energy project for the South West.”

Thomas Kercher, CEO of Pfalzsolar, said: “It’s a pleasure and special honour for us to work with Leapfrog Finance and we’re really proud to be a part of this great project. It’s inspiring to see how communities in Great Britain are pushing forward the energy turnaround. Even though Pfalzsolar was confronted with bad weather conditions at the Ernesettle site, they pulled out all the stops to get everything in place on time.”