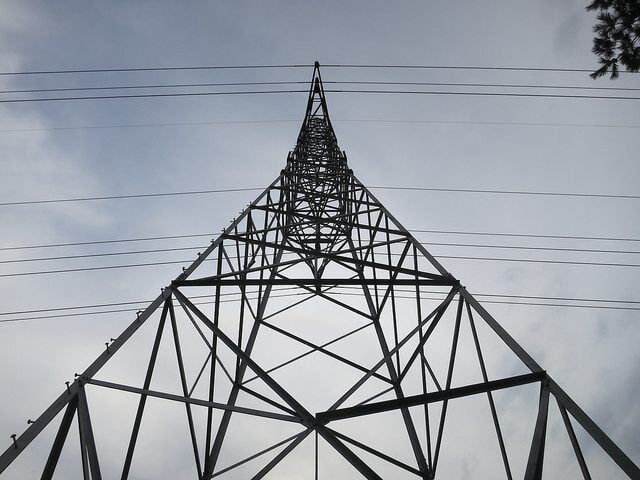 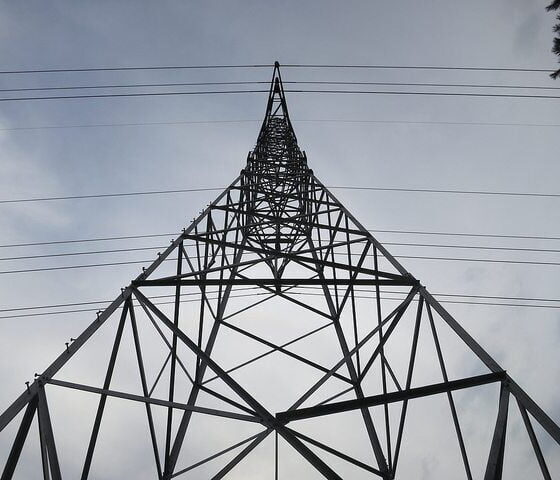 Growing up, I became used to the noise of coal trains rumbling through our town. My Grandad used to drive some of them. They supplied the three power stations visible from my bedroom window. However, should Grandad be alive today, the indications are that he would be driving much fewer trains. That’s because our electricity supply is fundamentally changing.

To chart our changing energy mix, I launched a service called MyGridGB which allows all of us to see Great Britain’s electricity supply in real time and to debate it using real numbers.

So what is this adventure in “grid watching” teaching us? In this article, I’ve pulled out some highlights of 2016.

1. For the first time in over 100 years, Britain doesn’t always burn coal

In 2014, Britain depended on coal for 30% of its electricity. However, as reported by The Guardian, Telegraph, Express, BBC, Daily Mail et al., Britain now switches off its coal power stations. 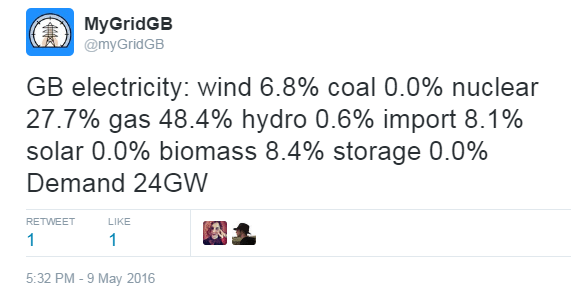 Switching off coal is not a regular occurrence: they were off for less than 2% of the time between January and September. But the number of coal trains passing through my time has plummeted. Coal provided 80% less electricity in September than it did in January.

Coal is, by far, the most polluting source of electricity in Great Britain. The effect of its demise has had a noticeable effect, In July, our electricity was 16% less carbon intensive than in was in January. However, turning off coal has left us ever more dependent on another fossil fuel – gas.

2. The ascendency of gas

Gas power stations met almost half of the electricity supplied in 2016 and its share rose sharply between February and May – replacing coal fired generators.

Saying we are switching from coal to gas to decarbonised is like saying you are giving up cake for chips as part of a low fat diet. Gas is, let’s not forget, a huge carbon emitter. It is eight times more carbon intensive than the committee on climate change says we need to be by 2030.

Britain risks becoming addicted to gas. If we are not careful, our addiction (like the most powerful of narcotics) will become harder to break the more we turn to it. North Sea gas production has fallen to historic lows. Imports are at record levels and fracking is controversial source of gas. So are there alternatives that we are should be exploiting?

3. Solar and Wind are on the rise

The view from my childhood bedroom window is a notably different these days. Solar farms have appeared around the town, as have a few wind turbines. I even put solar panels on the family home which generate 80% of the electricity we use.

Between January and February, the wind blew particularly strongly– creating a flurry of activity on my Twitter feed. In the summer however, the days have been calmer. Production fell to below 4% of the electricity we consumed in June.

Solar has surprised many of my followers. On sunny weekend days when electricity demand is low solar can hit more than 20% of our electricity supply. And, as widely reported, solar has outstripped coal in terms of monthly energy production for three months this year.

My analysis shows that Britain’s wind and solar resource combined quite nicely together in 2016. On a monthly level, wind died off in the summer, solar took its place. In the past eight years, solar and wind have grown to provide more than 10% of our electricity. If we are to decarbonise, their growth needs to continue to offset gas power stations.

Britain imports around 6% of her electricity. France has run an interconnector to the UK since 1961, providing us with nuclear powered generation from the continent.

For some, imports are a problem. They challenge the notion that Britain has energy independence. What such people might not realise is that Britain is now a net importer of gas. Should gas power stations now be labelled imports?

More imports are on the way with cables proposed to link the UK to Norway, Belgium and even Iceland! Is Britain ready for a scenario when gas power stations and interconnectors fail?

5. A missing piece of the puzzle

In September I tweeted the following image from the University of Sheffield. It shows the UK’s energy demand including heat and transport fuels. The tweet generated 2,500 impressions- That’s because it says something quite shocking- the UK uses huge amounts of energy for heat when compared to our energy needs for electricity.

Even more concerning for those wanting to decarbonise is that we use five times more gas in the winter than in the summer. It becomes almost meaningless to discuss an energy mix when gas is so dominant in how we power our homes. It feels right to begin to question this dependence. What if the gas supply fails for example?

My Grandad’s coal trains rumble past much less frequently these days. One of the three coal power stations I grew up seeing from my bedroom window has been demolished, the second is set to be torn down and the third is being converted to a gas power station. My town in some ways tells the story of our electricity supply with the growth of wind and solar.

So what is possible in the future? I do of course have an answer to that, and over the next few months, I aim to assess whether a large penetration of low carbon energy can be introduced into electricity mix. The small amount of gas and storage that I think we need is going to surprise you. As will what that might do to what we all understand– our wallets.

The only unknown for now is what Grandad would have made of all this change whilst driving his coal train. I guess it’s not possible to have an answer to everything when you want it.

The purpose of MyGridGB is unrelated to that role. Energy is an important global issue that creates a huge amount of debate. Andrew wants the site to be a good source of information on electricity and to drive informed debate.