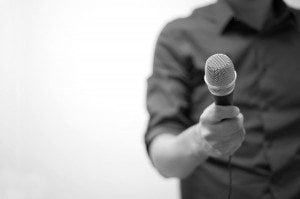 We talk to a lot of people and occasionally persuade a brave few to submit to a Blue & Green interview. We only interview the people we think are making a significant difference in sustainability so we don’t need to be a John Humphreys/Jeremy Paxman. We’re much nicer than that. Enjoy reading them again or the ones you missed first time round.

Activated carbon has traditionally been made from coal, hardwoods, and more recently coconut shell, as well as other nut shell waste. We’ve been seeing more and more evidence that bamboo can make a good alternative, and so we set out to find out more by interviewing Troy Wiseman, CEO of EcoPlanet Bamboo. Read more.

Six seafood innovators capped the Fish 2.0 Competition Finals & Sustainable Seafood Innovation Forum in Palo Alto. We speak to one of the winners founder, President, and CEO of SabrTech, Mather Carscallen.

How to introduce Jochen Zeitz? The youngest CEO to head a public company in Germany, a member of the Board of Directors of Harley-Davidson and chair of their sustainability committee, creator of the not-for-profit Zeitz Foundation of Intercultural Ecosphere Safety and The Long Run and co-founder, with Sir Richard Branson, of the B Team. In a word, cool. Having a rare quiet moment he answered a few of our questions. Read more.

Michael has been a Chief Executive, entrepreneur, and advisor in technology and sustainability for almost 20 years and has advised multinationals and governments globally, including the White House, United Nations Framework Convention on Climate Change (UNFCCC), and the California State Senate. Michael is currently Vice Chairman of the Board of the Natural Capital Coalition (NCC). Michael was voted one of the “Top CEOs to Follow” by BusinessWeek magazine and is the inventor of several clean technology patents. He has led several companies as CEO around the world, focused on the intersection of technology, sustainability, and innovation. He speaks to Blue & Green. Read more.

Andrew Behar, CEO of As You Sow

Andrew Behar, As You Sow CEO, has 30 years of experience as a Senior Executive and strategist in the clean-tech, communications, and life science sectors. Prior to joining As You Sow, Andrew founded and was CEO of a clean-tech start-up developing innovative fuel cell technologies. He served as COO for a social media agency focused in the sustainability space and has been a strategic consultant in the non-profit sector. He has founded and run start-ups in the medical device and communications areas and serves on the boards of several high-tech innovation companies. Andrew is also an elected board member of US-SIF, the Forum for Sustainable and Responsible Investment. Today he talks to Blue & Green. Read more.

Dr Raj Thamotheram is the CEO and co-founder of Preventable Surprises. He is a well-recognised thought-leader on how companies and investors can adapt to put people and planet on par with profit and so deliver long-term value to their clients/customers and society. He has held senior positions in the pension fund and investment management industries and the NGO world.  In 2013 he asked, “We’ve had 20 years of sustainable investment and is the world getting any better?” Today he talks to Blue & Green about Forceful Stewardship. Read more.

Kenya Investment Authority (KenInvest) promotes investments in Kenya. It is responsible for facilitating the implementation of new investment projects, providing After Care services for new and existing investments, as well as organizing investment promotion activities both locally and internationally. We speak to its Managing Director Dr. Moses Ikiara. Read more.

Peter Bakker, President and CEO of the World Business Council for Sustainable Development (WBCSD), today launched a report showing that it was possible to deliver 65% of the required carbon emission reductions to meet the UN target of keeping global warming under 2°C. He tells Blue & Green more about the report and the Low Carbon Technology Partnerships initiative. Read more.

After a career in manufacturing businesses, Mark initiated the RSA Tomorrow’s Company inquiry into ‘the role of business in a changing world’. The resulting report, published in 1995 led to the creation of Tomorrow’s Company as an independent, business-led think tank. It also laid the foundations the redefinition of the directors’ duties in the 2006 Companies Act. In recent years he has concentrated on the issue of board and investor responsibilities for stewardship, co-authoring a report with the Institute for Family Business on Family Business Stewardship. Today he speaks to Blue & Green. Read more.