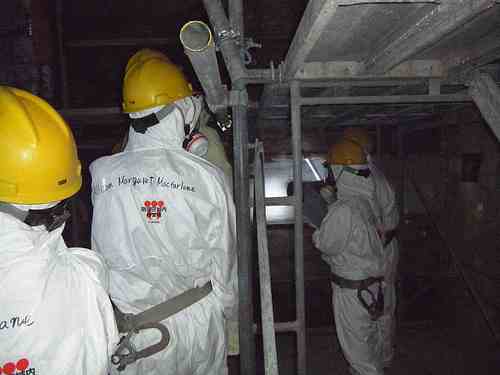 As clean-up operations reach a critical point at the stricken Fukushima Daiichi nuclear plant in Japan, political parties have invited the government to give up false promises of sending local residents back home and directing funds towards new accommodation.

The Japanese Liberal Democratic party (LDP) raised concerns that despite decontamination efforts, the area around the nuclear plant, whose reactor exploded in 2011, might never be inhabitable again.

Around 160,000 people were evacuated after the tsunami devastated the power station, causing the leak of radioactive matter that contaminated water.

The government has started the clean-up operations – but the decontamination process is behind schedule and is expected to take another three years.

Japan has so far spent around £30 billion in measures to solve the nuclear accident, excluding the cost of decommissioning the reactor.

Despite this, the country is planning to spend additional one trillion yen (£6.3 billion) to accelerate the clean-up and allow residents to go back home. The Liberal Democratic party has claimed that some areas are too contaminated to be restored, and that therefore the government should consider using the funds to allow people to go live elsewhere.

One of the evacuees, Ichiro Kazawa, told Reuters, “I think it will be easier for people who can’t go back anyway to be told that, so they can plan their future.”

Others pointed out that even once the area is decontaminated, they would not go back as they do not feel safe.

Shigeru Ishiba, LDP’s secretary-general, said in a recent speech, “At some point in time, someone will have to say that this region is uninhabitable, but we will make up for it.”

Meanwhile, Tokyo Electric Power Co (TEPCO), the company that owns the Fukushima plant, has reported that water radioactivity in Fukushima had reached a new record high on Tuesday.