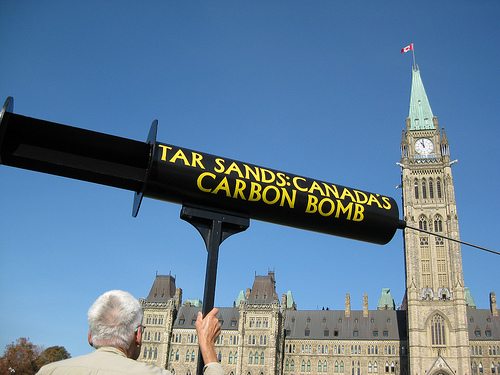 The European Commission has scrapped plans to label tar sands oil as ‘highly polluting’ after years of lobbying from the Canadian government and the industry, in a move that has concerned campaigners.

In a controversial decision on Tuesday, the commission has paved the way for Canadian oil being shipped to Europe by refusing to label it as highly polluted – with the UK among the states supporting the import of the fuel.

Oil from tar sands is a particularly carbon-intensive and polluting type of oil, whose extraction results in the emission of 12% more carbon dioxide (CO2) than traditional oil. Tar sands oil has also been linked to health issues in indigenous people living near drill sites.

Climate commissioner Connie Hedegaard said, “It is no secret that our initial proposal could not go through due to resistance faced in some member states.

“However, the commission is today giving this another push, to try and ensure that in the future, there will be a methodology and thus an incentive to choose less polluting fuels over more polluting ones like, for example, oil sands.”

In June, the first shipment of Canadian oil arrived in Spain and was greeted by protests. If current pipeline projects go ahead, Europe could be importing 700,000 barrels of tar sands oil per day by 2020.

“The commission has recognised the highly polluting nature of tar sands but is going to let this climate killer be used by European oil companies with no penalty at all. The commission has clearly seen the problem but – under heavy pressure from the oil industry and the Canadian and US government – chosen not to act on it,” said Colin Roche, extractives campaigner with Friends of the Earth Europe.

“Clearly the commission has sold out Europe’s climate policy by putting the trade talks ahead of the protection of the planet. With just over a year to go before crucial climate talks in Paris the EU should be acting decisively on climate change, not watering down its own policies in the face of the fossil fuel industry lobby.”

Analysis by the Carbon Tracker thinktank identified investment in Canadian tar sands oil as being particularly high risk, but many have argued that given its precarious relations with Russia, the EU needs to look at alternative forms of energy.