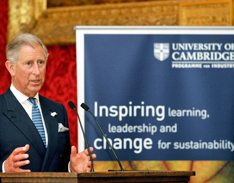 The Prince of Wales’s Corporate Leaders Group (CLG) has announced its support for the Friends of Fossil Fuel Subsidy Reform Communiqué, calling for reform, and ultimately, elimination, of fossil fuel subsidies.

The International Energy Agency (IEA) estimates that fossil fuel subsidies amounted to US$510 billion in 2014. This is based on the gap between what consumers pay and the actual cost of supply, but doesn’t consider the environmental and health costs. It is six times more than that allocated to renewable energy and hinders investments in efficiency and renewables.

The Friends of Fossil Fuel Subsidy Reform, together with France and the United States, launched a Communiqué calling on the international community to increase efforts to phase out subsidies to fossil fuels in light of a global effort to reach an agreement at the United Nations Framework Convention on Climate Change (UNFCCC) conference of the Parties (COP 21) in Paris in December.

Sandrine Dixson-Declève, Director of the CLG explains: “Our members, leading businesses from across the world, are being loud and clear, end perverse fossil fuel subsidies now for the benefit of sustainable and low carbon economic development.

“They recognise fossil fuel subsidy reform as an important climate-change mitigation policy with clear economic, social and environmental co-benefits.  The international community should increase efforts to phase-out subsidies to fossil fuels through policy transparency, ambitious reform and targeted support for the poorest.”

At the New York Climate Week breakfast where the announcement was made, New Zealand Climate Change Ambassador, Jo Tyndall, welcomed the leadership of the CLG in signalling businesses’ commitment to this step towards a low-carbon energy future: “Momentum behind the Communiqué is building, as leaders from business and government recognise it as a way to express support for global action that will deliver a significant decrease in emissions.”

Moroccan Minister Hakima El Haite said: “Not only do fossil fuel subsidies put a strain on government coffers but they also don’t help the poorest of society.”

The Communiqué asks stakeholders to support fossil fuel subsidy reform and help economies across the globe deliver sustainable socio-economic and low carbon outcomes. The latest signatory to the Communiqué last week was the Netherlands, who signed at the CLG run Green Growth Summit.

The Communiqué encourages the international community to advance reform through three interrelated principles: increased transparency around fossil fuel subsidies, greater ambition in the scope of reform and the provision of targeted support for the poorest.

The breakfast, co-hosted by the CLG with the Governments of New Zealand, Norway and Finland, brought together governments and business leaders to discuss joint action on reform.  Tone Skogen, Norway’s Secretary of State, hailed the call for joint action and stressed: “Partnerships must play a role to catalyse the move towards sustainable energy and push more companies to step forward and act!”

The Communiqué will be presented with more signatories at COP21 in Paris, in December 2015, to support efforts to reach a new global climate agreement. By endorsing the Communiqué, countries will gain an important opportunity to publicly support FFSR as part of their national trajectory towards a more sustainable and low-carbon economy.