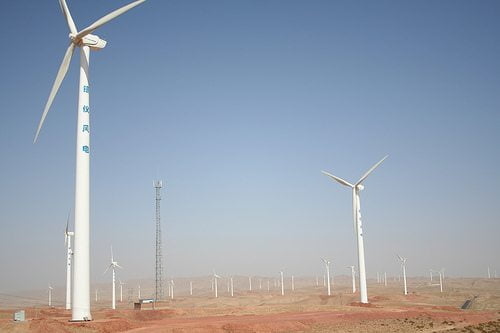 By embracing green technology and improving energy efficiency, China could generate 80% of its electricity from renewable sources by 2050 while also cutting costs, a new report has said.

The study, prepared by the campaign group WWF, suggests that the world’s fastest-growing economy could cut its energy-related carbon emissions by 90% from predicted mid-century levels.

It claims that for this to happen, coal must be completely removed from the country’s energy mix by 2040. The authors say this could happen, but would require “considerable political courage”.

“By fully embracing energy conservation, efficiency and renewables, China has the potential to demonstrate to the world that economic growth is possible while sharply reducing the emissions that drive unhealthy air pollution and climate change”, the WWF’s China climate and energy programme director, Lunyan Lu, said.

“This research shows that with strong political will, China can prosper while eliminating coal from its power mix within the next 30 years.”

According to the US Energy Information Administration, coal accounted for 66% of China’s installed electricity generating capacity in 2012. The Chinese National Energy Administration last month projected that this share would fall below 65% in 2014.

Though investment in renewables was increasing, the report warns that if tough political action – such as a ban on new coal plants and a Clean Air Act similar to that launched in the US – does not follow, then it might not be enough.

Campaigners say that if the biggest carbon emitting countries do not transition to renewable dependent energy structure, it will be almost impossible to avoid runaway global climate change.

Lou Leonard, WWF’s US vice-president for climate change, added, “Both China and the US are at a crossroads where leaders need to choose between a future where healthy communities are powered by clean, renewable energy or a future darkened by air pollution and the dangerous effects of climate change.

“This year, as all countries develop new national climate targets in advance of talks in Paris, our leaders need to choose that brighter future.

“For Chinese leaders the choice is simple. This report shows that renewables are doable. China can meet bold new targets with today’s technologies while cutting energy costs.”

The Chinese government has been under heavy pressure to reduce its polluting emissions in recent months, not only for the sake of the environment but also to benefit its people.

In January, former health minister Chen Zhu said he believed that up to 500,000 premature deaths were caused each year by air pollution in China.

In response to the crisis, the Chinese government embarked on the world’s largest ever renewable energy drive, with plans to double the number of wind turbines it uses to generate electricity over the next six years.