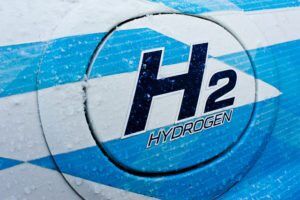 A new report launched by the H21 Leeds City Gate project has found that using hydrogen for heating would dramatically reduce CO2 emissions in the UK, if support by Carbon Capture and Storage development.

The H21 Leeds City Gate project report, launched yesterday outlines the benefits of replacing natural gas in the city’s gas grid with ‘green’ hydrogen – a solution which could be rolled out to the rest of the country.

Burning hydrogen instead of natural gas produces pure water rather than emitting CO2, providing a way to slash the CO2 emissions from heat and cooking – currently over 30% of the UK carbon emissions.

However, as the report points out, generating hydrogen from fossil fuels would require that the CO2 generated during this process be securely stored, in order for the hydrogen to be truly low carbon. An alternative method of producing hydrogen from water using electricity would be far more expensive – even if generated using renewable energy.

By capturing the CO2 and transporting it to secure offshore locations to be stored safely underground, using this ‘green’ hydrogen in place of natural gas would achieve a 73% reduction in CO2 emissions for the entire system, according to the report.

As highlighted in the report, existing gas infrastructure can be used for hydrogen transportation, and many new jobs created as part of the roll-out of a hydrogen programme.

“Replacing the use of natural gas with hydrogen for heating and cooking would almost completely decarbonise these systems. These have so far been a very difficult area of emissions to effectively reduce without digging up urban streets and at acceptable cost.”

“However to be truly low carbon, generating the hydrogen will require CCS, or much more expensive electrolysis of water using electricity. The least cost method of generating the large amounts of Hydrogen required is to reform natural gas into pure Hydrogen, and separating the carbon in the form of CO2.”

“CCS and hydrogen represent a winning combination for UK decarbonisation efforts, and I welcome the launch of the H21 Leeds City Gate report to point the way forward.”