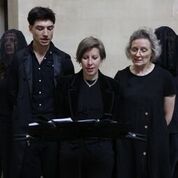 Liberate Tate, the art collective that has carried out a series of performance interventions in Tate galleries over the issue of its BP sponsorship, is today enacting ‘Fifth Assessment’ in Tate Britain, a choreographed reading of the Fifth Assessment Synthesis Report of the Intergovernmental Panel on Climate Change. The performance takes place in the lead up to UN climate summit in Paris in December.

Joining Liberate Tate for Sunday’s performance will be Hollywood actor Ezra Miller, who played the eponymous role in the film We Need To Talk About Kevin and is starring as ‘The Flash’ in the upcoming adaptation of DC’s comic book superhero. Ezra Miller, who has a background in durational performance art, has previously expressed concern on the role that oil companies are playing in exacerbating the climate change crisis.
Liberate Tate’s ‘Fifth Assessment’ performance in Tate Britain will start at opening time and last until 1pm, at which point the performers will leave the building and travel across London while still reading from the Fifth Assessment to to the British Museum to join with a host of other groups from the Art Not Oil network who are making protests and performances over BP sponsorship over the course of the day culminating in a large intervention at 3pm.
Yasmin de Silva who will take part in Sunday’s performance said: “Last week Tate installed solar panels on the roof of Tate Modern. If the art museum recognises the need to promote clean, renewable energy, it must also realise how incongruous it is to be so embedded with one of the dirtiest and most controversial oil companies in the world through its sponsorship relationship with BP.  The Fifth Assessment report, written by hundreds of international scientists, spells out the urgency of the need to act on climate. Unfortunately oil companies like BP are doing all they can to prevent meaningful action on climate change from  taking place. And Tate, the British Museum and other London cultural institutions are explicitly endorsing them in doing it.”
While institutions like Tate have stressed the importance of BP sponsorship, last year the UK’s Information Tribunal forced the art museum to concede that the amounts of money involved were embarrassingly small – £224,000 a year on average between 1990 and 2006.
Tate’s five year sponsorship deal with BP is due to end at the end of 2016. Sunday’s performance is contributing to the public pressure on the art museum not to renew the deal. Liberate Tate and other Art Not Oil groups are calling on all London’s cultural institutions such as Tate, British Museum, the Royal Opera House and the National Portrait to end their relationship with climate-changing oil company BP.
Related Topics:Ezra MillerFifth AssessmentFifth Assessment SynthesisReport of the Intergovernmental Panel on Climate ChangeLiberate TateYasmin De Silva