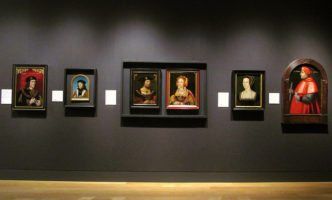 The signatories argue, “These institutions’ decisions are badly out of step with the mood of their own staff and audiences”. The announcement of the new deals last week was met with condemnation from campaigners and an assurance that protests and art interventions against BP sponsorship would escalate – including a public ‘Splashmob’ in the British Museum in September.

Clayton Thomas-Müller, a prominent Canadian Cree activist and signatory of the letter, said:“By signing this new deal with BP, the British Museum is helping the oil company drill more wells and build more pipelines – poisoning Indigenous communities and destroying our planet’s future. Once again, the British Museum is on the wrong side of history. With public culture supporting fossil fuel colonialism, it’s up to frontline struggles to keep the oil in the soil.”

Anna Galkina, a campaigner with Platform (part of the Art Not Oil coalition), said: “Oil sponsorship is meant to buy artists’ silence and audiences’ approval, and silence the people who live on the frontlines of oil extraction and climate change. This letter shows that more and more artists, culture professionals and academics are no longer happy standing by while BP brands the UK’s biggest museums and theatres for a pittance. BP is wrecking the climate and wrecking lives, from the Gulf of Mexico to West Papua, and deserves to be cast out of our culture.”

BP claims its sponsorship comes with ‘no strings attached’ but internal emails released by the Art Not Oil coalition have shown this to be untrue. In 2015 BP leant on the British Museum to host a Mexican “Days of the Dead” festival where it was able to meet with members of the Mexican government just weeks before bidding for new drilling licences in the Gulf of Mexico, according to British Museum emails published in a report by the coalition in May. Other emails showed BP convened a security meeting attended by senior staff from sponsored institutions to discuss security measures for responding to peaceful protest. The Museums Association’s Ethics Committee have considered the report’s findings and are expected to issue a statement soon on whether its Code of Ethics has been breached.

Among the letter’s signatories are 16 representatives of frontline groups, solidarity campaigns and Indigenous struggles against BP’s operations and the impacts of climate change, from Australia to Latin America to the US Gulf Coast to West Papua. A full list of signatories can be found below.

Re: Another five years of BP-branded culture

We cannot afford another five years of BP-branded culture. We believe museums, theatres and galleries are public institutions that must play a positive role in taking urgent climate action and defending human rights. If the world is to avoid rapid and devastating climate change in the coming decades, most of the oil on BP’s books cannot be burned. Meanwhile, the company continues acting in defiance of the Paris Agreement on climate change, and harming lives every day – despite community resistance from the Gulf Coast to West Papua to Australia.

We know now that BP sponsorship comes with strings attached. A recent report revealed how BP leant on the British Museum to hold events timed with BP’s bid for drilling licenses in Mexico, and how the museum checked in with BP on curatorial decisions.

Branding a major museum or theatre has become cheaper for BP (just £375,000 a year for each institution, on average). This is less than the cost of a short billboard campaign. Surveys show that a majority of Londoners, and the British Museum’s own staff, are against BP sponsorship.[7] These institutions’ decisions are badly out of step with the mood of their own staff and audiences. BP is not welcome to use our culture to promote its destructive business – these deals must be cancelled.