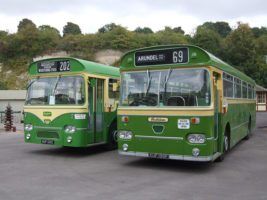 WWF Scotland Director, Lang Banks, has welcomed the news that Scottish Enterprise have granted Alexander Dennis Ltd £7.3 million in funding for its low-carbon bus programme with the following statements :

“Scotland has a well-deserved reputation for innovation, so it’s great to see Alexander Dennis receive support to research and develop low carbon vehicles.

“Their success story goes to show that the transition to a low-carbon future, including in areas such as transport, can bring economic benefits, creating and securing jobs.

The transition to a low-carbon future, including in areas such as transport, can bring economic benefits

“This week’s Programme for Government is an opportunity to set how the benefits of low-carbon Scotland could be spread out to other sectors of the economy, building on the achievements we’ve seen in renewable electricity.

“For example, setting a target of generating half of all of Scotland’s energy – across heat, electricity and transport – from renewable sources by 2030 would extend leadership to the low-carbon transport sector, giving business and industry confidence that there’s a strong market here in Scotland for low-carbon vehicles.”