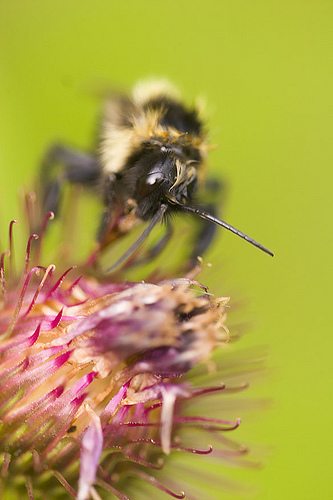 Bees identify food sources based on fear of predators

A new study has found that bees fly away from good food sources that they associate with risky predators.

The research explains that bees’ fear is shown through foragers avoiding potentially dangerous food sites, making colonies of bees less risk-tolerant than individual bees, which appeared to be braver.

James Nieh, one of the authors, said, “This strategy of colonies collectively exhibiting significantly more caution than the riskier individual foragers may help honey bees exploit all of the available food sources, with some intrepid foragers visiting more dangerous food while the colony judiciously decides how to best allocate its foraging.”

According to the research, the presence of predators reduces the foraging visits by 55-79% and residence times by 17-33%.

Researchers from the Eastern Bee Research Institute of Yunnan Agricultural University in China studied the impact of two Asian hornet species of different sizes on Asian honeybees. They discovered that bees tried to avoid the biggest hornet, which they perceived to be more dangerous than the smaller one.

“However, predators are clever and can focus on sweeter food, ones which bees prefer. So we also tested how bees would respond when sweeter food was also more dangerous. What we found was that the individual bees were more risk-tolerant. They avoided the giant hornet at the best food, but continued to visit the lower quality food with the smaller hornet.”