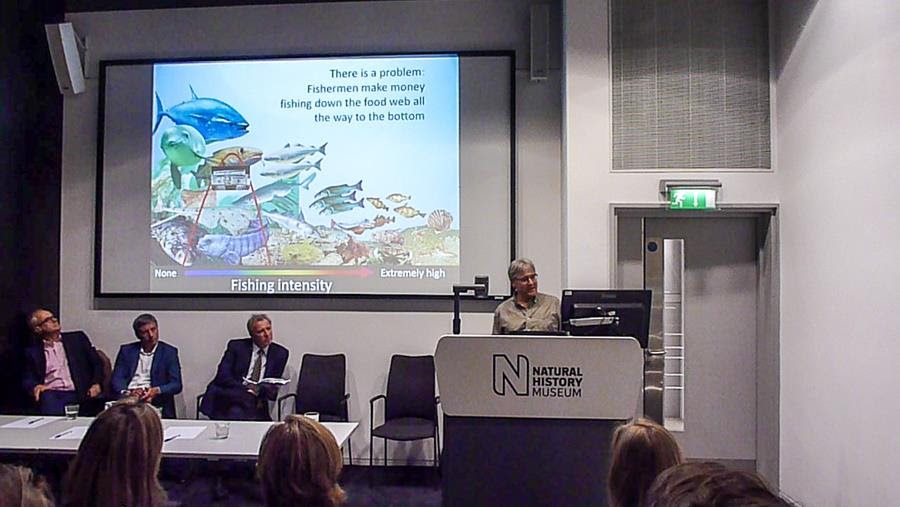 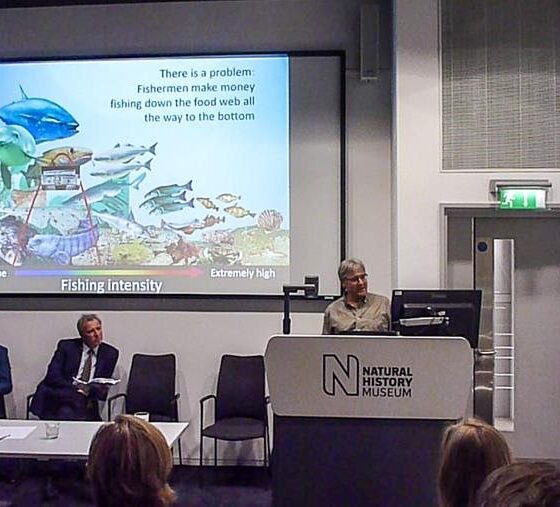 Wielding a large meat cleaver and red cashmere scarf, Clare Brook, CEO of the Blue Marine Foundation called for order in the packed Natural History Museum’s Darwin Centre last Monday. People had come together for an update on BLUE’s highly disruptive and results-oriented strategy to bring hope (and fish) back to the world’s oceans.

“BLUE has the most extraordinary expertise amongst its trustees and its employees, but it has been a bit shy about airing that expertise,” Clare began. “This symposium is designed to give you a chance to hear some of their views and also to understand how the creation of Marine Protected Areas combats overfishing, how Marine Protected Areas actually work and how quickly fish can regenerate within them.”

To summarise the speeches:
The first speaker, Professor Callum Roberts of the University of York, was applauded onto the stage. Callum, a conservation thought leader, illuminated the scale of the problem and what has gone wrong in our seas. His remit was to introduce Marine Protected Areas (MPAs), explain why we need them, how many we need and what sort of protection they require to effectively restore depleted marine ecosystems.

– Callum revealed an astonishing fact, that the total protected area of the UK’s oceans is not 10%, not 1%, but 1/100,000th of a percent.
– He highlighted the paradox about modern fisheries in that the most sustainable fisheries that we have are also the most destructive. He compared scallops and prawns to rats and cockroaches, due to their strong resistance to environmental pressure and the fact that they thrive in habitats disturbed by destructive fishing methods. “Less resistant, commercially important species of fish cannot persist in an environment that is subject to widespread, industrial scale extraction.”
– Callum made clear that establishing MPAs is the solution to rebalancing the seas. “The then,” said Callum, “was full of large animals and architecturally diverse ecosystems… this was a place that had an extraordinary abundance of sea life.” There is hope. We can get back there, with MPAs the route.
– Callum’s latest research at the University of York has been to examine how much of the sea we need to protect in order to bring about genuine recovery of marine species. By taking the average of all scientific studies, the mean figure is 36% and the median 35%. BLUE’s short-term goal is to protect 10% of the world’s oceans by 2020, but we are clear that we need to aim much higher than this in the longer term.

Dr. Tom Appleby, legal advisor to BLUE and for years a commercial lawyer, helped to create the first no-take zone in Scotland (rewriting the rulebook in the process). Tom spoke about the legal challenges surrounding MPAs (both here and in the UK Overseas Territories) and the fact that we all collectively own nearshore waters.
– “The fisheries,” Tom said, “actually belong to all of us in some way, shape or form. We’ve got to take control, as the public, of our own resource. We need to take an active interest in the management of this space.”
– Clare’s cleaver came in handy (metaphorically). Tom likened the situation regarding scientific proof of the need to protect our oceans with a story a doctor friend told him. A patient walked into A+E with a meat cleaver sticking out of his head. Doctors recommended an x-ray which revealed that the man had a meat cleaver sticking into his head. The conclusion: we don’t need precise scientific measurements to understand that overfishing is pillaging our oceans. The writing is on the wall. IN GIGANTIC LETTERS.

Dr. Simon Harding, BLUE’s head of conservation has twenty years experience in Marine Protected Area planning and monitoring. Simon spoke about the importance of community and local management and the need to work with local stakeholders at every step of the way.

Simon made a key point about what an MPA actually means and how it affects local populations:
– He made clear that designating an MPA doesn’t mean a ban on all fishing for the local people. MPAs should be designated in close consultation with all stakeholders and the viewpoint of the local people is of paramount importance.
– An MPA can only work if it has the support of local people. By creating mixed use MPAs where there are some zones for rotational closure (according to breeding patterns), some zones for total closure and some zones with certain gear restrictions, the locals are much more likely to support and enforce the area.
– Simon cited examples such as Lamlash Bay in Scotland and BLUE’s project in Lyme Bay, Dorset, where local buy-in has made for better conservation and improved livelihoods for fishermen.

Finally, Charles Clover, BLUE’s chairman spoke about the reality of negotiating, cajoling and occasionally naming and shaming to actually make things happen. “Arm-twisting,” Charles said, “is an incredibly important skill in this area of conservation.” As is daring to dream. Charles gave further tangible examples of BLUE’s successes so far: the Lyme Bay Conservation Reserve, vast swathes of territory protected in Chagos and Pitcairn, not to mention cross-party political commitments to create Blue Belts around all fourteen UK Overseas Territories.

Proceeding from the hall, further debate ensued, with the overwhelming conclusion being thus: re-establishing the health and biodiversity of marine ecosystems is entirely within our grasp. BLUE’s work is facilitating the creation and management of Marine Protected Areas, at home and abroad. The environmental and social impacts of MPAs must be carefully considered and the complex legal and emotional challenges faced must be overcome. This is vital to ensure a thriving ocean for future generations.

BLUE would like to thank everyone that attended our first symposium, everyone in our network who made it possible, our panel of expert speakers and the Natural History Museum who so kindly hosted the event.

BLUE is a UK registered charity set up in 2010 by some of the team behind the award-winning documentary film The End of the Line. There mission is the active and effective protection of 10% of the world’s oceans by 2020, delivered through a network of marine reserves and private sector led solutions in the sea.