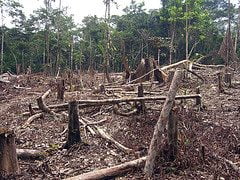 Brazil’s soybean industry has been blamed for indirectly contributing to the deforestation of the Amazon, despite the introduction of a moratorium that aimed to prevent this process.

Brazil is the second largest producer and exporter of soybean, after the US.

Most of the world’s soy crop is used in feed for poultry, pork and cattle. Global demand for meat is increasing, requiring an increase in soybean cultivation, which in turn requires vast expanses of land.

The deforestation of areas of rainforest for soybean cultivation threatens wildlife and biodiversity. In South America, almost 4m hectares of forests are destroyed every year, 2.6m of them in Brazil alone.

Inspired by a Greenpeace campaign, in 2006, the Brazilian Association of Vegetable Oil Industries (ABIOVE) and the National Association of Cereal Expoerters (ANEC) signed the Soy Moratorium, an agreement that has been regularly renewed and is now in effect until January 2014.

The agreement ruled that soy that had been grown on deforested land would not be exported. The moratorium is observed by multinationals such as Bunge, Cargill and ADM, and involves 90% of Brazil’s soybean exports. Deforestation to grow soybean continues, as some buyers have not signed the agreement.

However, the soybean industry is still blamed for indirectly contributing to the deforestation of the Amazon.

“This agreement shows that consumers no longer tolerate deforestation of the Amazon, but it does not control the indirect impact of soybeans on the jungle,” said Marcio Astrini, co-ordinator of Greenpeace Brazil’s Amazon protection campaign.

Areas of rainforest are still being deforested by ranchers to raise cattle. When the cattle have exhausted these areas, soybean growers move in and buy the land. In 2008, 62% of deforested Amazon land was used to graze cattle.

Bernardo Machado Pires, head of environmental affairs at ABIOVE, said, “It [the soybean industry] buys land that has already been cleared, which is easier to plant, and the cattle raising moves to areas that are less expensive, in other words, the jungle. Thus are the dynamics of agriculture in these regions.”

Environmental campaigners argue that there is an alternative, and that Brazil could increase production without damaging such vulnerable ecosystems.

“The country has 60m hectares of former pasture or abandoned land. They could be turned into productive land and thus double the amount of farm land”, said Astrini.

Overall deforestation in the Amazon rainforest has continued to increase, accelerating by 88% in 2012 according to satellite analysis.