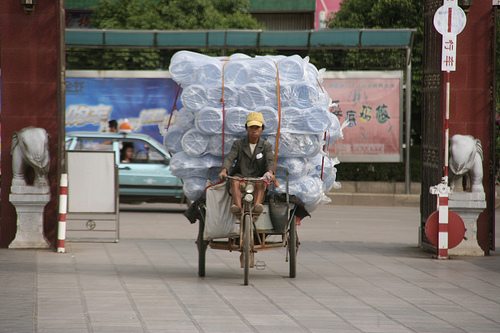 China’s largest oil firm is being blamed for the contamination of drinking water that has led to over 2.4m residents scrambling to buy bottled water.

It was reported on Friday that authorities in the western city of Lanzhou ordered all water supplies to be cut off, after levels of cancer-causing chemicals were detected at 20 times the national average.

Residents descended on the supermarkets to buy bottled water, with many stores reportedly running out.

China’s state media has reported that the city’s environmental protection chief Yan Zijang has blamed the incident on a subsidiary of China National Petroleum Corporation, claiming that a pipeline owned by the company leaked.

The leak is believed to have contaminated water sources at a plant owned by Veolia Water, the sole supplier for inner Lanzhou, although pollution levels now returned to normal in most areas.

Concentration of the natural gas benzene, a chemical used in vehicle fuel and to make plastics, was said to be 20 times more than the national average in the affected water. Environmental charities swiftly warned that exposure to high levels of the chemical could be fatal.

Lanzhou is the capital city of north western Gansu province, with a population of around 3.6m and an industrial hub of the China – it is also believed to be one of the country’s worst environmental offenders.

The incident is only the latest in a series that have raised serious concerns over China’s environmental record.

The country also has an infamous air pollution problem. Last year, an eight year old girl was diagnosed with lung cancer, with doctors blaming the diagnosis on high levels of air pollution.