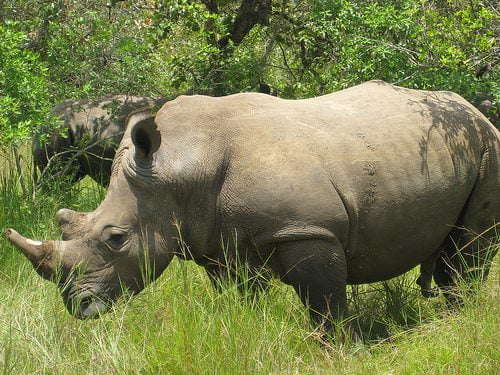 Conservation organisations have gathered in London to discuss the increasing high-profile issue of wildlife trafficking and poaching, in order to find solutions to the phenomenon that they say has reached “crisis proportions”.

The symposium is hosted by the Zoological Society of London (ZSL). Experts from NGOs including the WWF, Fauna & Flora International, TRAFFIC, the International Fund for Animal Welfare (IFAW) and the Wildlife Conservation Society are in attendance.

Prof Jonathan Baillie, director of conservation at the ZSL, said, “It’s clear that illegal wildlife trafficking is completely out of control, and we need to bring the best minds together to really identify some clear solutions and show clear leadership and direction.”

Illegal killing of wildlife has reached worrying levels over the past two years, especially rhinos and elephants, which are hunted for their ivory. In South Africa alone last year, more than 1,000 rhinos were killed – up from 668 in 2012. This has been largely driven by growing demand for rhino horn in China and Vietnam.

The two-day London meeting, which began on Tuesday, seeks solutions to how to tackle illegal trade at source by enforcing laws and using new technologies to protect animals. Strategies derived from the fight to drugs and arms trade will also be considered.

“People on the ground need to have the tools, the technology and the money to implement conservation effectively. They are up against massive crime networks that are extremely well resourced – and they are outmanned and outgunned”, Baillie said.

At the same time, conservationists will look at how to weaken demand, through campaigns and initiatives to raise awareness among consumers and the Chinese traditional medicine industry – which often uses ingredients derived from wildlife.

“You must treat the illegal wildlife trade as a battle, because it is precisely that. The rising and apparently insatiable demand – mostly from Asia – has provided an economic incentive for trafficking, which is becoming increasingly criminalised and professional”, Charles said in a video message on YouTube.

William added, “We have to be the generation that stopped the illegal wildlife trade and secured the future of these magnificent animals and their habitats; for if we fail, it will be too late.”