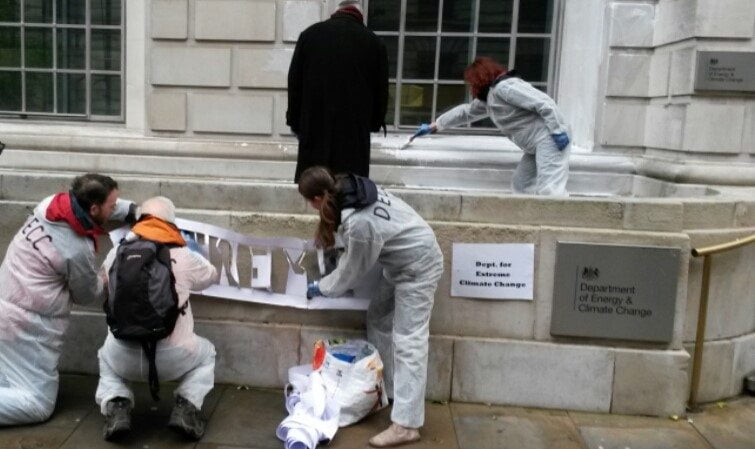 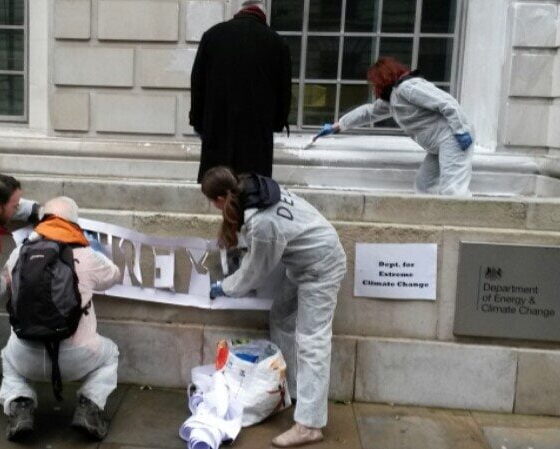 Five Christian climate protestors were arrested for criminal damage in Whitehall this morning for protesting against government hypocrisy on climate change, which they call a ‘climate whitewash’. The five, from Christian Climate Action wrote in whitewash and black paint on the wall of the DECC (Department for Energy and Climate Change). They said “underneath the hypocritical whitewash of fine talk on climate, are DECC policies that lead to death.”

The five, acting on the first day of the Climate Summit in Paris, arrived at the DECC wearing white paint suits with ‘DECC’ on them. They delivered a letter to Amber Rudd, the Energy Secretary, prayed and stood with a skeleton and a ‘whitewashed tomb’ outside, before whitewashing the wall, and painting in black letters, ‘Dept for Extreme Climate Change’ on the wall of the DECC.

Ruth Jarman, one of the five, said: “Climate change is the most serious danger facing the world that God created to be good. Rather than addressing climate change, DECC policies are undermining global efforts to confront this threat. The meeting of world leaders at the Paris Summit this week is a crucial moment. We have taken this action because the urgency and importance of real cuts to greenhouse gas emissions is not getting through.

“Climate change is already a source of war, conflict and refugees. The ultimate test of a moral society is the kind of world that it leaves to its children. So we hope more Christians and others will be blessed with a holy rage, moved out of their apathy and led in love to prophetically resist climate ignorance and denial, realising our need for fundamental change and repentance.”

Those arrested were Ruth Jarman from Hampshire (52), Phil Kingston from Bristol (79), Helen Whitall from Exeter (32), Westley Ingram from Surrey (39), and Father Martin Newell from Birmingham (48). They were taken to Charing Cross Police Station and Belgravia Police Station where they are expected to be charged with criminal damage.