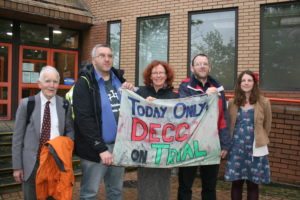 Five members of Christian Climate Action have been found guilty of causing criminal damage. In November last year the group whitewashed the walls of the Department for Energy and Climate Change and painted “Department for Extreme Climate Change” in black paint over the top. They say they were exposing the department’s hypocrisy and had a “lawful excuse” for painting the walls.

Their case was held in front of a crowded public gallery as around 25 supporters of action against climate change gathered at Hammersmith Magistrates Court to pray and vigil throughout the day.

The defendants, who represented themselves, did not dispute their presence at the scene or the actions attributed to them, but argued that they had a ‘lawful excuse’ under section 5 of the Criminal Damage Act.

Speaking after the verdict, Father Martin Newell said: “Pope Francis has called on Christians to go further in opposing climate change and we have tried to answer that call in faithfulness to Jesus who was also tried and found guilty by a court.

‘As a Catholic I believe in the power of symbols and symbolic actions and our actions symbolically highlighted that this department is whitewashing the truth of what’s happening. This is urgent – climate change is already happening and people are already dying.”

Phil Kingston, 80, and the oldest member of the group, said: “I was speaking on behalf of my grandchildren and the uncertain future they face. Preventing unnecessary deaths is an integral part of our humanity. When we do what we believe is right, good will come. I have regularly questioned what to do when democratic processes yielded no progress and warnings were ignored and have concluded that, as with other successful protest movements, non-violent direct action is the answer.”

Ruth Jarman, 53, said: “We do not agree with today’s judgement. The point of the law is to maintain justice, stability and order. Climate change threatens all these things so fundamentally that the law should be used to defend those who are trying to stop climate change, not those who are creating it. We think DECC should have been in the dock, not us. The department speaks fine words, but its actions scupper any possibility of sufficient global action on climate change.”

Helen Whitall, 32, said: “What we did was reasonable under the circumstance. As a Christian I feel that whilst it is essential to always act out of love for God and others, I have a responsibility to speak out against injustice to protect all that God loves, human and non-human, which may at times involve non-violent direct action in the tradition of Christ and the prophets where I feel justice and truth are being silenced.”

Westley Ingram, 39, said: “The climate talks in Paris were akin to leaders gathered in a burning house agreeing to only buy flame retardant furniture in the future. I do not believe we have damaged DECC’s building, because we have not affected its utility; if we have done anything, it is to damage the propaganda value of the building by exposing it for what it really is.”

The group has received support from a number of theologians. Michael Northcott, Professor of Ethics at the University of Edinburgh, said: “Without such acts in the history of the United Kingdom, the vote would not have been conferred on non-land owning citizens, nor on women, and we would not have ended slavery, or forced child labour in our factories. Civil disobedience is essential to democracy provided it harms no one. The actions of these protestors were a non-violent and peaceable way to expose the hypocrisy of current UK government energy policies. The UK has the potential still to lead the world towards the new sustainable energy economy that the climate crisis calls for and this type of action is essential to the democratic process in the UK.”