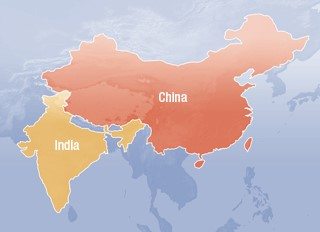 #COP21 Report: China’s green transformation holds key to success – but what will India do?

China’s commitment to climate change and low-carbon development is a major reason why the UN climate summit in Paris is likely to succeed, a report concludes. But another finds that questions remain about India’s carbon heavy development plans.

The first report, by chinadialogue and the Energy & Climate Intelligence Unit, concludes that one of the main differences between the failed Copenhagen summit of 2009 and the Paris talks is the rapid acceleration of China’s progress towards a low-carbon economy.

“Most people who are unfamiliar with China simply haven’t grasped the scale of the Chinese government’s ambition towards low-carbon development,” said Sam Geall of Sussex University, Executive Editor at chinadialogue.

“For China, climate change is both an existential risk and a major opportunity. It intends to be both leading the pack in investment in renewable energy and low-carbon technologies, and also to be the supplier to the world of those same technologies.”

The report concludes that China’s increased engagement with the UN process stems from a drive to address serious environmental impacts in its own country, on climate change and air pollution, as well as a desire to demonstrate true geopolitical leadership.

“Major developing states such as China have grasped the fact that dealing effectively with climate change is in fact a massive opportunity – and it’s now Britain and the rest of Europe that are playing catch-up with them,” said Richard Black, Director of the Energy and Climate Intelligence Unit.

“It’s remarkable that lazy memes such as ‘it’s pointless doing anything to tackle climate change because China’s building a coal-fired power station every week’ still continue to appear in parts of the Western media.

After the failed Copenhagen talks of 2009, China was painted in the West as having been the main villain.

Isabel Hilton, CEO and Editor of chinadialogue, said that India risks garnering the same label if COP21 fails to deliver an agreement compatible with the 2 Celsius global warming target.

“India’s national solar mission and its commitment to the Global Solar Alliance are highly significant, but it would be a pity if they were undermined by an equally strong commitment to coal,” she said.

Joydeep Gupta, editor of indiaclimatedialogue.net and a co-author on the report, said: “Given that India is ranked the second most vulnerable to the economic costs of climate change, only a strong global deal can generate the finance to avert disaster.

“India’s INDC contains ambitious renewables plans, but the bigger challenge will be the economic case for a shift to green development. There is certain to be increased pressure on India during these negotiations.”