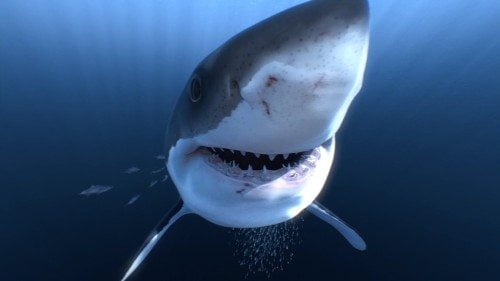 Virtual reality education start-up Curiscope has received a Proggy Award from PETA for designing a new interactive experience aimed at educating the public about sharks,. PETA’s Proggy Awards (“Proggy” is for “progress”) recognise animal-friendly achievements in commerce and culture.

Curiscope’s new creation, the “Great White Shark” experience, uses 360-degree virtual reality to put spectators in the awesome presence of a computer-generated shark in her natural habitat, swimming freely outside the confines of a cramped aquarium tank. Accompanied by an immersive soundtrack, the 90-second film even includes a cross-section view of the shark’s anatomy, offering viewers an inside look at her internal organs and powerful muscles – and no animals were harmed.

“Sharks are sensitive, highly intelligent animals who belong in the open ocean, not imprisoned in a tank for human amusement”, says PETA Special Projects Manager Dawn Carr. “PETA is awarding Curiscope for the stunning opportunity it’s offered kind people eager to see sharks up close and personal – without subjecting any animal to a lifetime of deprivation in an aquarium. Its ground-breaking use of virtual reality points to a future when viewing sea animals is far more educational, accessible and immersive than watching sad, frustrated captives in a glass box.”

“This sample adventure was created with the aim of connecting people with an animal who’s too often vilified”, says Curiscope CEO Ed Barton. “Our vision with Curiscope is to allow anyone, anywhere, to go on an educational adventure through virtual reality that’s both exciting and inspirational.”

Curiscope’s “Great White Shark” experience can be seen with the aid of a virtual reality viewer, such as Google Cardboard, which creates an exciting and visceral experience for viewers as they look around to see sharks swimming above, below and directly towards them.

PETA – whose motto reads, in part, that “animals are not ours to use for entertainment” – notes that the release of the “Great White Shark” experience closely follows the untimely death of a shark captured off the coast of Japan, who died after just three days of captivity at Okinawa Churaumi Aquarium.