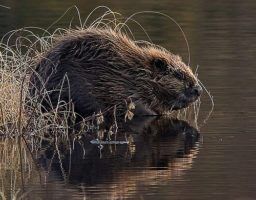 The Eurasian Beaver Handbook has been released by the Royal Zoological Society of Scotland (RZSS) while a decision on their future is awaited. The handbook is published by Pelagic Publishing, one of the UK’s leading authorities on science and nature literature, and is a hands-on guide to beaver management.

Written over the course of two years by ex-RZSS employee Roisin Campbell-Palmer and a number of leading beaver experts, the handbook offers a unique perspective on the ecology and behaviour of the Eurasian beaver, as told by those who have worked closely with the species.

“It’s fantastic to see this book finally come to fruition after so long spent in the field researching it. The Eurasian Beaver Handbook is first and foremost a practical field guide; however, it also sends a strong message that we can and should live alongside beavers again in Scotland.

“Beavers are a keystone species which play a pivotal role in wetland restoration and biodiversity, and are a missing part of Scotland’s wildlife. They were lost entirely through human actions, but with the right management measures in place they can have significant environmental, economic and social benefits, something which the Scottish Beaver Trial ably demonstrated.”

The Scottish Beaver Trial was a five-year partnership led by the Scottish Wildlife Trust, the Royal Zoological Society of Scotland and host partner Forestry Commission Scotland, which ended in May 2014. It was the first licenced reintroduction of a mammal to the UK and brought beavers back to Scotland for the first time in 400 years.

Following the completion of the Trial, a detailed monitoring report was produced in June 2015 by Scottish Natural Heritage and passed to Scottish Government to help inform a decision on the species’ future. This decision will draw upon evidence from the Scottish Beaver Trial and from the Tayside Beaver Study Group, established in May 2012 to look into the impacts of beavers on the Tay and Earn catchments, which had escaped or were illegally released. Roisin Campbell-Palmer was RZSS’s representative on both of these projects.

“We are extremely proud of Roisin for having produced such an authoritative and comprehensive guide on the Eurasian beaver, something which she knows all about from her time at RZSS. The Eurasian Beaver Handbook could hardly be more timely, and it illustrates just what a valuable part beavers could play in Scotland’s future.

“RZSS believes that the majority of Scotland’s people are ready and willing to live alongside beavers once again. This book, together with the work of the Scottish Beaver Trial, highlights the fact that beavers can strengthen our country’s reputation as a modern society that truly values its environment.”

In addition to species information, the book also provides practical advice on how to recognise the presence and activities of beavers, how to mitigate against adverse impacts of beaver behaviour (including some of the effects seen on Tayside), and demonstrates how to apply management techniques in accordance with current legislation. Funding for this publication was provided by the Welsh Wildlife Trust and Colchester Zoo.

For more information about the book, visit: