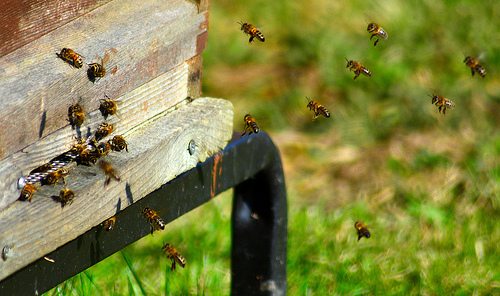 The Duchy of Lancaster has offered financial support for those who wish to begin beekeeping on its land, in an effort to combat the decline of bees in the UK.

Nathan Thompson, chief executive of the Duchy of Lancaster, said, “As custodian of the land with significant interest in the long-term viability of the countryside, we are seeking means to help promote bees and beekeeping within our surveys.”

Thompson added, “As one of the main hindrances for aspiring beekeepers is the associated start-up cost, we are proposing to offer a grant to cover the initial cost should any of the Duchy’s tenants wish to keep bees.

“The grant will cover a beginners beekeeping course officiated by a beekeeping association, essential equipment including a hive, safety wear and honey extractor as well as the first swarm of bees which will used to begin honey production.”

It is the latest of a series of initiatives aimed at raising awareness of the bee decline. BBC presenter Alys Fowler recently urged gardeners to make their gardens more bee-friendly, while Monmouthshire county council announced plans in March to plant wild flowers and increase grassy spots to help bees.

Wild bees, bumblebees and honeybees have experienced a worrying decline over the past few years, with scientists planting much blame on the widespread use of agricultural chemicals, in particular neonicotinoid pesticides. These were subsequently banned by the European commission in December, despite opposition by chemical corporations and some EU member states, including the UK.